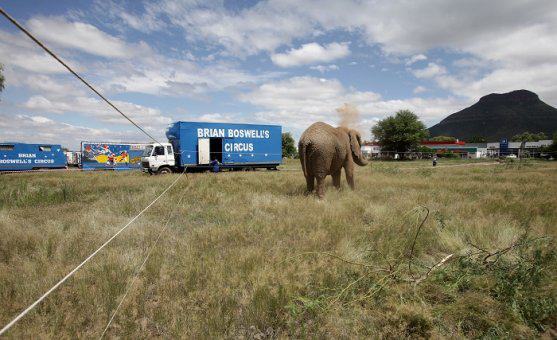 File: A case against two circus owners and an employee from the well-known Brian Boswell Circus was taken off the court roll due to a lack of evidence.

PORT ELIZABETH - Charges against two circus owners and an employee from the well known Brian Boswell Circus have been withdrawn in the Port Elizabeth magistrate’s court.

On Tuesday the matter was taken off the court roll due to a lack of evidence against the three.

Jane Boswell, her daughter Georgina, and elephant handler David Marais were facing a string of charges for allegedly beating, chaining, confining and not providing sufficient water and shade to elephants between December 2012 and January 2013.

The three faced charges which relate to the contravention of the Animal Protection Act 71 of 1962.

Deputy Director of Public Prosecutions, Advocate Chris de Klerk, said that there was not sufficient evidence in the case against the three.

“There must be some sort of culpability, the owners must know about it, condemn it or fail to act upon an incident after being notified about it. There is not sufficient evidence in this case,” said De Klerk.

In 2013, the National Council of SPCA laid criminal charges against the Boswell Circus for the alleged abuse of elephants whilst the circus was at Walmer West Primary School in Port Elizabeth. The school later withdrew permission for the circus to use its grounds.

Video footage which aired on television programme Carte Blanche during 2013 showed elephants chained, exposed to heat for hours and beaten with sticks.

A source close to the case told the African News Agency (ANA) that elephant handlers seen on the video footage were apparently fired and had since disappeared.

“The case has been going on for a long time, since 2013, it’s been delayed and delayed. We want to get the proper reasons on paper from the DPP and then we will take it from there.

"The two handlers seen on the video footage have apparently disappeared, they don’t have ID numbers for them, so no one knows where they are.

"So we will get the reasons and then take it from there,” said Wentzel.