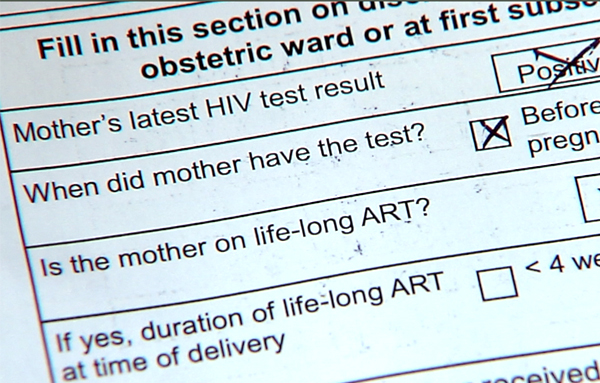 Some government patient card disclose the HIV status of family members, which disregards their human rights.

JOHANNESBURG - Driving from Johannesburg to Mthatha with cameraman Clive Mtshali to do this story gave me plenty of time to think.

"How come whenever I come to my province to do a story, somewhere at the root of it lurks under-development, incompetence, or insensitive officialdom?"

The last time I was in the Eastern Cape to do a story for Checkpoint was in 2014, when I told the story of Luyiso High School in PE and how promising young rugby players were simply unable to advance their talent because of a lack of transformation at school, club and provincial level.

This time, I was heading for the rural areas of the former Transkei, a six hour drive from Port Elizabeth, to tell an entirely different, though still unhappy,  story.

I’d received a call from a friend of a friend, telling me about how some rural clinics in the Eastern Cape had disclosed the HIV status of several women without consulting them. To do this in an area where there are such high levels of stigma and discrimination can be extremely damaging for the individual concerned.

You get gossiped about, harassed, abused and physically threatened. Not only the person with HIV, but their families too.

It’s a theme that was explored in Jonny Steinberg’s book “Three Letter Plague” in 2009. The author befriended a man called ‘Sizwe’ (not his real name, he’d been too afraid to use it) living in Lusikisiki, 130km north-east of Mthatha. Even though Lusikisiki had an advanced HIV program run by Medecins Sans Frontieres and Sizwe knew it was a viral infection that could be treated, he refused to get tested. For him, the thought that everyone else could find out – the nurses at the clinic, a neighbour who might see him entering the clinic - was enough to kill him.

According to the Health System Trust’s 2013/14 report, 11.4%  of the population of the Eastern Cape is HIV positive. That’s just under 800,000 people. Many of them live in under-developed and unsophisticated areas where, as was the case with Sizwe, the fear of being found out is like a death sentence.

One of our case studies, Thandeka, also lived in Lusikisiki. But she was too afraid to meet us there, so we interviewed her in Mthatha, against a window, her face silhouetted and unrecognisable.

“Back at home, in our communities you just don’t tell everyone you are HIV positive. We live in the villages and our parents don’t understand that HIV is treatable and manageable”.

But some thoughtless health care workers at her child’s clinic had included Thandeka’s status on the child’s clinic card. This even though it contravenes laws that protect people living with HIV and disregards their human rights. The reason, said Health officials, was to monitor mother to child transmission at birth and during breast-feeding.  But the child used the clinic card at school and now Thandeka feared the teachers were aware of her status and would tell everyone.

Similarly, we interviewed a mother called Gloria. She even asked us to disguise her daughter’s clothing in post-production for fear of identification.

This is not only the story of Thandeka and Gloria’s human rights, it’s also the story of the HIV-stigma that continues to plague our rural areas – be it Limpopo, Mpumalanga or Eastern Cape.
In the words of Dr Khanyi Tshabalala of the Anova Health Institute, an NGO in partnership with the Health Department:

“We have medicalised HIV a lot and perhaps we’ve lost the community aspect of it."

"In the past there was a lot of community involvement and activism, where disclosure and stigma was in the forefront of discussion. Perhaps we have dropped the ball – people need to be free to talk about their status,” said Dr Tshabalala