Churches to continue supporting Zuma 'spiritually', but not financially 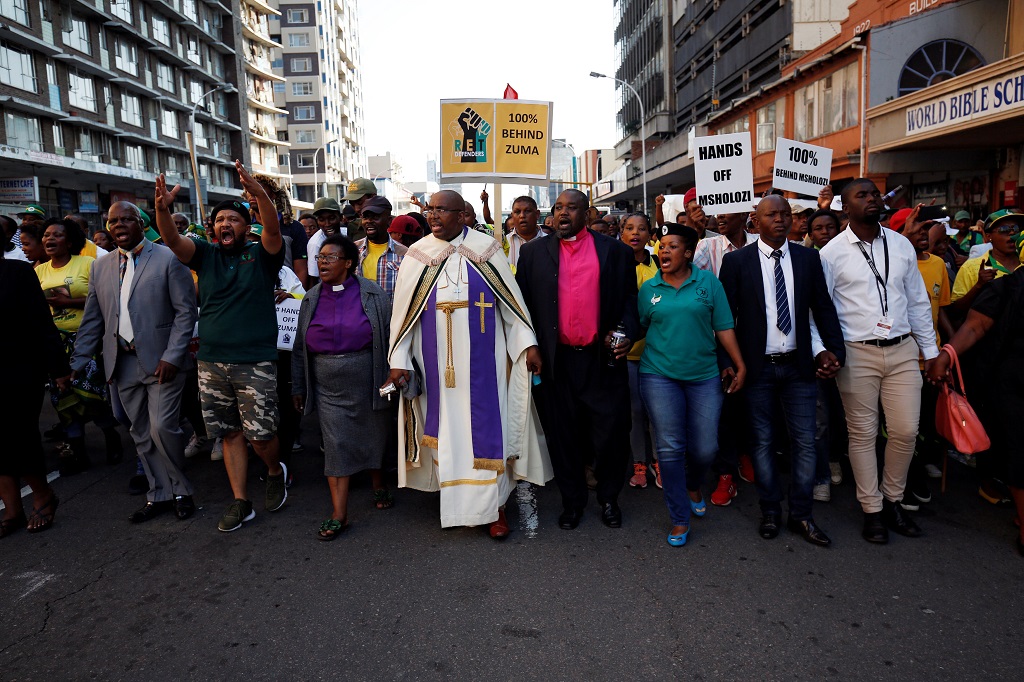 Even religious leaders came to join the march standing in solidarity with former President of South Africa Jacob Zuma.

DURBAN - A KwaZulu-Natal-based bishop said on Monday that churches backing Jacob Zuma would continue their “spiritual support” for the former state president but were unable to assist with his legal expenses.

“We are not doing any fundraising, we don’t have the capacity…we are not working on that at all. We are supporting the former president and his family spiritually,” said Bishop Vusi Dube, founder of the eThekwini Community Church International.

Dube was speaking to the African News Agency (ANA) shortly before a media briefing at the church, based in Durban’s city centre.

His church, along with several others falling under the National Interfaith Churches of South Africa (NICSA), had gathered to announce activities taking place before Zuma’s second appearance at the Durban High Court on Friday, where he is facing corruption charges.

All of those present have pledged their support for Zuma in the past under the HandsOffZuma campaign.

They believe Zuma is being “persecuted” for working against a Western capitalist agenda and for being pro-poor. They further contend the charges Zuma faces are politically motivated, making it impossible for him to have a fair trial.

As they did for his first appearance, the group intends to hold night vigils for Zuma supporters. On Thursday night, they will gather at King Dinuzulu Park from 7pm until 7am on Friday morning.

From there, they will march to Victoria Embankment “where we will gather outside the Durban High Court,” said Bishop TB Ngcobo. “We will then wait for our former president to come and address the supporters.”

Shezi said black businesses were not benefiting from Zuma’s removal and that the charges should be dropped. “As black business, we stand with President Zuma through thick and thin.”

Zuma is accused number one in a case that relates to the multi-billion rand arms deal dating back to 1999. He is facing 16 corruption charges for allegedly receiving bribe money from French arms manufacturer Thales and from his former financial adviser, Shabir Shaik. Thales is accused number two.

The arms deal secured military equipment for the country’s air, sea and land defence forces at a cost of more than R30-billion. Shaik was found guilty in 2005. He is currently serving a 15-year sentence at his upmarket Durban home on grounds of medical parole.