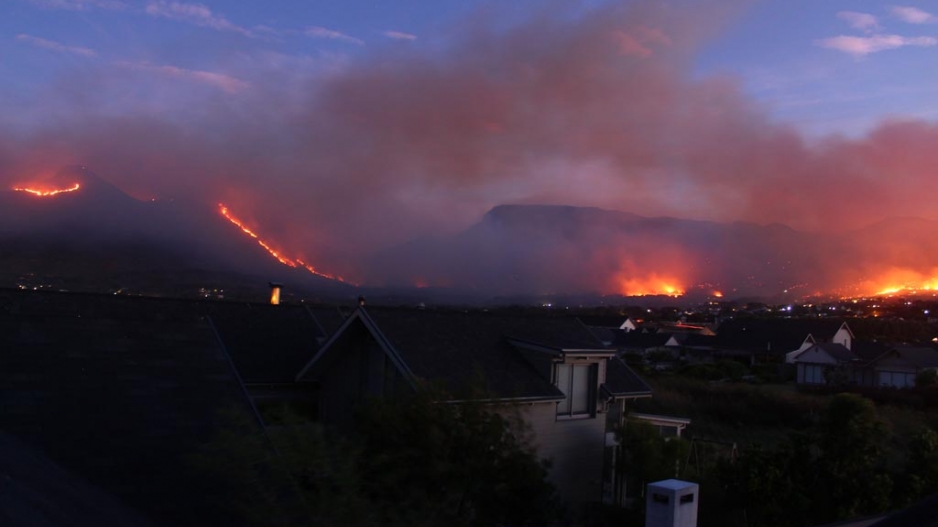 A general view of a fire raging in the mountains above Muizenberg, Cape Town that started on 2 March 2015.

Click here to view the interactive map-based timeline about the fire which started on Sunday 1 March in Muizenberg, Cape Town.

CAPE TOWN - The Safety and Security Directorate in Cape Town says the blazes could have been ignited by a cigarette butt thrown out of a car window.

Firefighters have been working through the night to extinguish one of the biggest blazes the city has seen for some time.

The fire started in Muizenberg and crossed the Peninsula to Hout Bay. A luxury resort has been destroyed, and several homes, as well as an old age complex, had to be evacuated.

“I have just been sent a photograph from someone who whatsapped it to me saying they’ve just seen someone throwing a cigarette out of the window on Boyes Drive, exactly where the fire occurred, so negligence and callus behavior by people putting people and property at risk, people’s lives at risk, so very sad," said Cape Town Safety and Security Directorate, JP Smith.

"We’ve had a huge increase of fires, with dry and windy conditions and I’m afraid negligence by people doesn’t help.

The blaze has already raised over 3,000 hectares and homes from Hout Bay to Muizenberg remain under threat.

Hard hit by the inferno is the Tintswalo Atlantic Resort in Hout Bay, which was engulfed by flames in the early hours of Monday morning.

"Out of about 11 rooms we have four left. Our main area has completely burned to the ground," said Warwick Goosen of the Tintswalo Property Group.

"All the milkwoods are burnt which is a big tragedy for us. It&39;s a building, but the energy comes from the people and thankfully nobody was hurt."

Dry and windy conditions continue to frustrate firefighters&39; efforts to contain the inferno, although wind speeds had dropped considerably compared to those on Sunday night and early Monday morning.

"We&39;ve got more or less about 135 firefighters on the scene, we have deployed them on various flanks on the fire," said Philip Prins of San Parks.

"That&39;s firefighters from the table mountain national parks, working on fire, and also from the volunteer wildfire services. We will not put this fire out today. It&39;s going to continue. It is going to keep us busy for the rest of this week."

Noordhoek residents are among the worst affected.

Those who were evacuated have sought shelter at nearby churches and community halls.