City to provide shelter for those displaced in Joburg fire 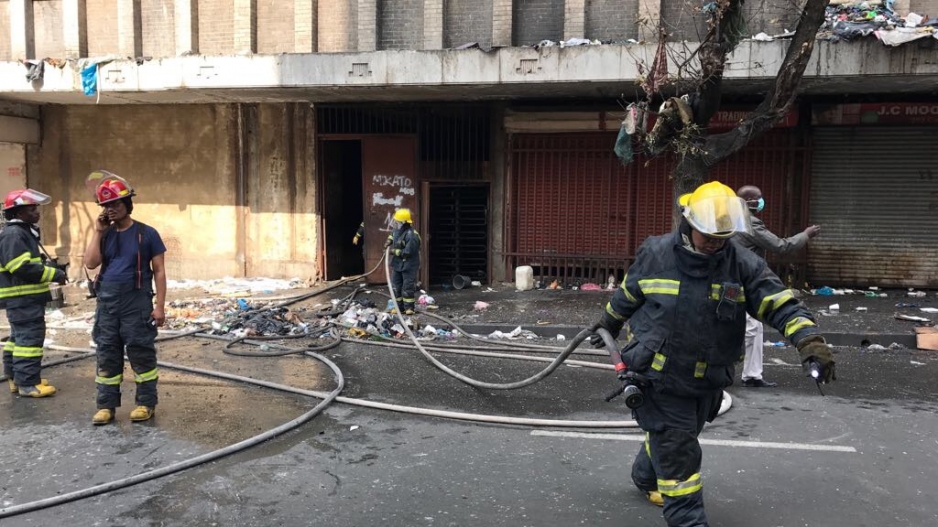 Seven people were killed after a fire broke out in a building in central Johannesburg on Wednesday morning.

JOHANNESBURG– The City of Johannesburg said on Friday, it was aiding residents, that were displaced by a fire in the Cape York building in the inner city, with alternative accommodation.

The hijacked building on Jeppe and Nugget streets in central Johannesburg caught alight on Wednesday morning, killing seven people while 50 other people were rescued from the rooftop. The building has no electricity, water or any form of sanitation.

The Cape York building, also dubbed “Mnyamandawo”, also harbours criminals who are involved in high-levels of crime and muggings in downtown Johannesburg.

Joburg MMC for Health and Social Development, Mpho Phalatse, said the human tragedy witnessed at the Cape York building in the early hours of Wednesday was truly regrettable.

Phalatse said the City has over 85 abandoned and hijacked buildings, where crime lords have been allowed to reign supreme and undisturbed.

“We would like to express our deepest condolences to the families of those who lost their lives, and wish a speedy recovery to all those who have been hospitalised. At present, we have provided alternative accommodation in tents on land near Wembley Stadium, and have identified and confirmed shelters for those in need,” Phalatse said.

“Almost 350 people have, as a result, been displaced, and although the City has limited resources, compounded by the historical housing backlog of 300,000 houses, we are making every effort to ensure that these residents are taken care of.”

Phalatse said her department and the Disaster Management Unit have done an assessment of all the affected citizens, and had begun providing bread and soup, distributing blankets to mothers with children, and arranging counselling services.

“The building is privately owned, and has been declared a crime scene and sealed off. Following the investigation, residents will not be able to re-enter, as the building has also been declared unsafe and unsanitary,” Phalatse said.

“[Johannesburg Metro Police Department] JMPD and [South African Police Service] SAPS are constantly monitoring the area, and the National Department of Home Affairs and Immigration Control has been contacted to assist with undocumented persons affected by the fire.”

Phalatse said although the City has limited space, we have allocated R219 million of the adjustment budget to the Johannesburg Social Housing Company to facilitate the transformation of these buildings into low cost housing for residents.