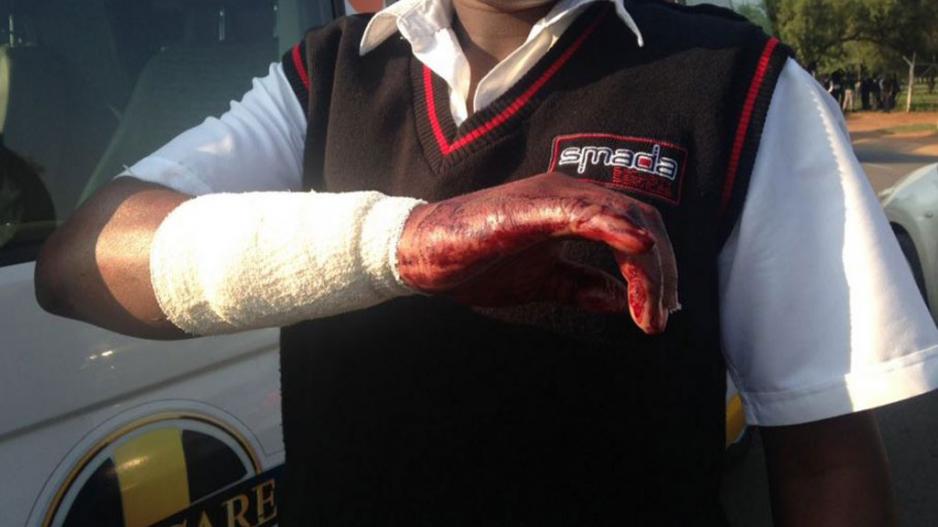 A security guard shows his injuries after clashes with students at the Tshwane University of Technology on 1 March 2016.

TSHWANE - Seven people were injured as clashes broke out between private security guards and workers at the Tshwane University of Technology (TUT) on Tuesday morning.

TUT security officers here say they fear for their lives as their OutsourcingMustFall protest action takes a bloody turn.

Outsourcingmustfall movement leaders say the attack on the officers at control room in TUT is war.

This occurred as TUT workers staged the Outsourcing Must Fall protest at the campus.

Five of the injured are TUT workers and two are from the private security company that was brought in to monitor the protest.

The injured have been admitted at the Pretoria West hospital.

InSourcingMustFall spokesperson Weizmann Hamilton said: “The clash was caused by a private security company that brought in a group of people to attack workers, so workers had no choice but to defend themselves.”

Classes at the campus were not disrupted.

Calm has returned to the TUT main campus. pic.twitter.com/0gPyEKwuoB

More paramedics arrive on scene. TUT operations inside campus are unaffected by the violence that took place at main gate.

De Ruyter said the institution had in October 2015 obtained a court interdict preventing the disruption of lectures and university operations.

Outsourcing Must Fall representative Vusi Mahlangu said the situation is calm and protesters have dispersed.

Mahlangu said workers will regroup and stage another demonstration on Wednesday.