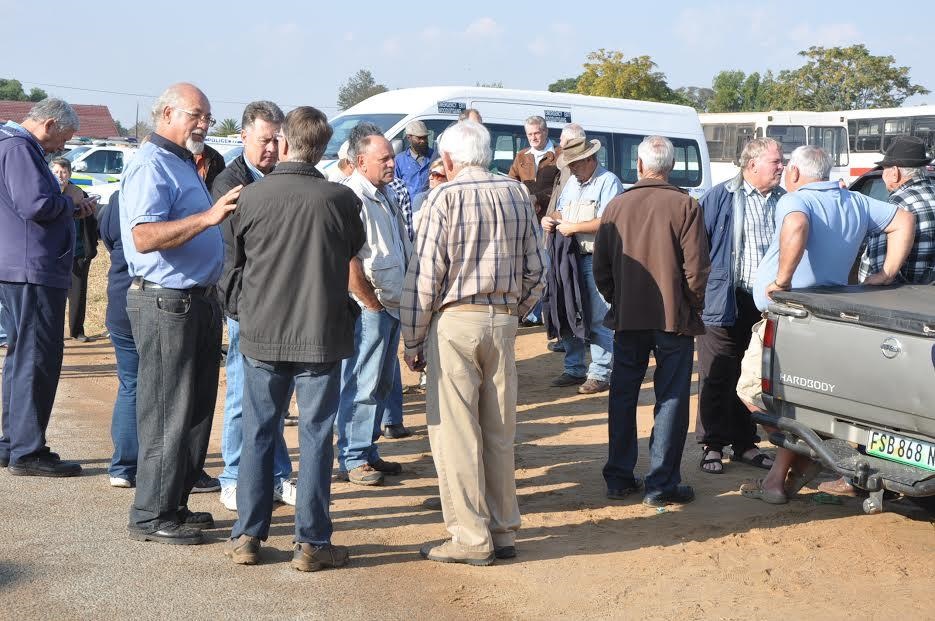 White residents of Coligny stand outside the local municipal offices to mull the proposed reconciliation plan.

COLIGNY – Residents of Coligny had mixed feelings on Friday to a proposed reconciliation programme for the North West town and its surrounds, which have been torn apart by race-fulled violence sparked by the death of a black teenager.

“It is too soon to talk reconciliation, deep wounds have not healed and people are still deeply hurt,” said Kgothatso Mathamela.

Pamla Papenfus insisted the small town was not racist.

"I walk from town to the township [Tlhabologang] alone, I was never attacked, instead [black] people happily greet me and offer to walk with me. There is no racism in Coligny.”

She said the law must be allowed to deal with two farmers alleged to have killed 16-year-old Matlhomola Jonas Mosweu of the Scotland informal settlement.

“If they are guilty, let them do their time in prison; if they lied to the court, God will punish them,” she added.

Pieter Doorewaard, 26, and Phillip Schutte, 34, are accused of killing Mosweu on 20 April. They had accused him of stealing a sunflower from their employer’s field. They claim they put him in the back of a van but that he jumped out of the moving van and sustained neck injuries, from which he later died in hospital.

However, an eyewitness told the police Mosweu was thrown out of the moving van.

The death sparked violence in the town, with black residents targeting the homes of white people before a semblance of calm returned.

However, when the accused were earlier this week granted R5,000 bail each, violent protests erupted once again. Several houses and vehicles were burnt and shops looted.

Mathamela said it would have been proper if the bail was not granted and people started to engage ion a process of reconciliation.

Papenfus said reconciliation in Coligny was possible in court and the law must be applied equally.

READ: Family of Coligny teenager speaks out on his death

“Those who burn houses must be arrested. When a black person kills a white person, whites do not go to their houses and burn them.”

The Congress of South African Trade Unions (Cosatu) in North West said there was much racism on farms around Coligny.

“Racism is rife in Coligny and other parts of the North West province, farm workers are attacked and evicted without following the Labour Relations Act,” said Cosatu provincial secretary Job Dliso.

The Economic Freedom Fighters (EFF) said there could not be reconciliation without remorse.