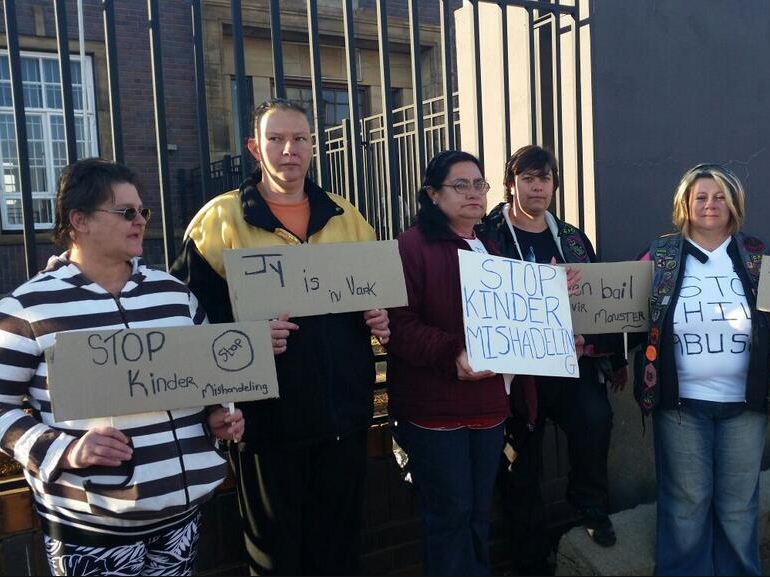 Members of the public stand outside the Springs regional magistrate's court where the so-called Springs Monster has appeared.

SPRINGS - There were sniffles and soft cries in the gallery of the Springs Magistrate&39;s Court on Wednesday at the bail application of a man accused of abusing his wife and five children.

Investigating officer Rudolf Jansen told the court of the torture and assault the children - aged between two and 16 - had allegedly been put through by their father.

The man&39;s 11-year-old son alleged that his father had strung him up by the wrists for two days using a rope. When asked to be set free, his father used teargas on him. He was also assaulted.

A woman dressed in a pink jersey sitting in the court gallery removed her glasses and wiped tears from her eyes.

Reading from the young boy&39;s medical report, Jansen told the court of the bruises and scars that the child had sustained.

He had numerous scars on his body, one of which was a scar on the head which had come from being struck with a knobkerrie, said Jansen.

The accused, who may not be named to protect the identity of his wife and children, faces charges of assault and kidnapping.

Further charges, including one of rape, were expected to be brought against him after allegations that he had forcefully had sex with his wife.

Jansen told the court in Afrikaans the house in which the family had been kept captive was in a dire state.

"There were live rats and rat droppings in the kitchen of the house."

There was also lots of pornographic material. The accused had rented out some outside dwellings on his property.

Jansen told the court that the tenants feared him.

Locals and non-governmental organisations demonstrating outside the court called for the accused to be kept behind bars. Some carried placards with the words "stop child abuse" or "monster".

Jansen told the court the accused was a flight risk.

The Springs man was arrested last month after his son fled the house and sought help from neighbours. They alerted the police.