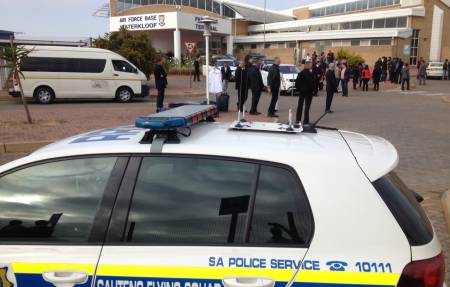 Johannesburg - As Guptagate gains momentum, and social media continues to burn with outrage and criticism, there’s an important question that nobody seems to be asking.

ANC Secretary General Gwede Mantashe came out last night, demanding answers from the SANDF, about how the Gupta wedding plane could have been allowed to land at Waterkloof Air Force Base, a strategic military installation and a national key point.

But so far, little has been made of the large blue light convoy, that escorted the wedding party all the way to Sun City.

Amid the confusion and contradiction, the police cars and VIP protection vehicles appear to have been overlooked.

Their presence and participation in what is rapidly becoming a scandal, could not have been spontaneous.

Somebody must have actively deployed them to duty.

This suggests that other arms of government were involved in helping the Guptas pull off their wedding extravaganza.

eNCA.com contacted the Police Ministry to try and get clarity on who authorised the convoy, and why.

Police Ministry spokesperson Zweli Mnisi told us the ministry was not the appropriate body to comment, saying, “Because those are operational factors, they fall under the Police Commissioner’s office. The minister does not deal with operations.”

When we contacted the SAPS Communications Head Phuti Setati, he would not answer any questions and referred queries to the central government communication body.

GCIS spokesperson said Phumla Williams told us she had nothing to say. “Once I have the information I will certainly communicate. I don’t have any information that has been forwarded to me by the South African Police Service.”

In video footage attached to this article, marked police cars can be seen escorting dozens of vehicles carrying wedding guests.

The A330 party plane landed at Waterkloof yesterday morning carrying more than 200 passengers.

The Gupta family claims it obtained permission to land there through the Indian High Commission, and that there were dignitaries, including government ministers on board.