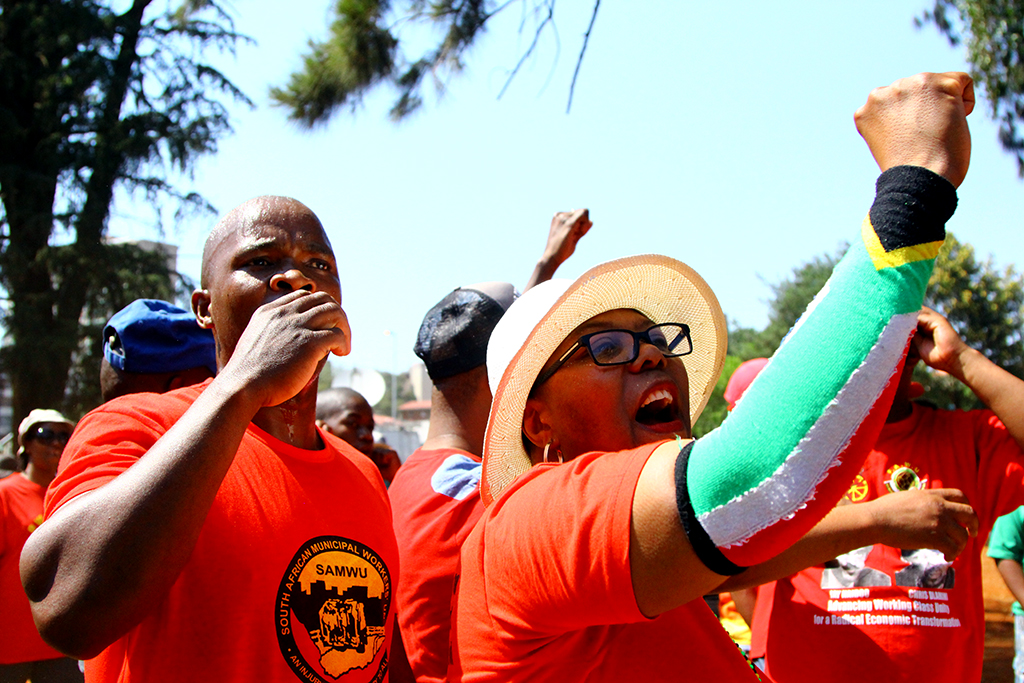 Members of the Congress of South African Trade Unions (COSATU) singing ,before the march through the Johannesburg city centre for jobs and economic transformation 07 October 2015.

JOHANNESBURG – The Congress of SA Trade Unions (Cosatu) on Monday condemned the SABC’s editorial decision not to broadcast footage of violent protests and images showing destruction of property.

Spokesman Sizwe Pamla said the SABC should reconsider its decision.

“We call on the SABC board to reconsider this decision and allow the public broadcaster to tell the South African story uncensored, warts and all. While the federation totally condemns violent protests and wants all perpetrators of such anarchy and vandalism to be investigated, prosecuted and sent to prison, we do not want the sanitisation of the news to hide the reality,” he said.

Pamla said it was not the SABC’s mandate to “mask the challenges that this country is facing and gag itself” from exposing people’s anger, including criminal acts.

The SABC said it condemned the burning of public institutions and had taken a decision that it would not show footage of schools being torched and similar acts in any of its news bulletins.

The public broadcaster urged other South African broadcasters and print media to join it in no longer covering the growing number of violent protests the country was seeing.

Pamla said once it is started, censorship never stopped.

“What we have seen and learned is that once censorship starts, it never stops because those who are empowered to censor and impose blackouts start to develop bottomless sensitivities and discover more activities that they feel should not be flighted on television. The fight against apartheid was also against censorship and news sanitisation and this decision cannot be allowed to stand.”

South Africans deserved access to all available information, including negative stories so that they could be empowered as active citizens, he said.