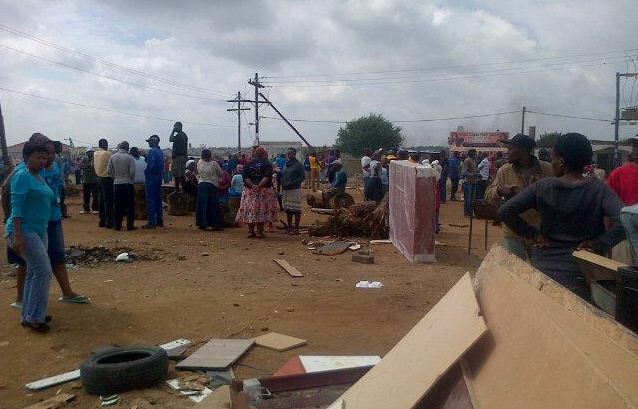 Riots broke out in Cosmos City, Johannesburg, when a sheriff tried to evict a family from their home on Wednesday afternoon.

JOHANNESBURG – There&39;s a heavy police presence in Cosmo City outside Randburg after members of the community began rioting as a result of the demolition of shacks.

Riots broke out earlier and quickly became violent after a sheriff tried to evict a family from their home on Wednesday afternoon, said police spokesperson Lieutenant Kay Makhubela.

“The sheriff went to the house with a court order to evict a family, (but) the community mobilised, stopping the sheriff form carrying out his work.

“They started throwing stones at the police and motorists (and) the police fired tear gas to disperse the crowd.”

Police have blocked the main roads into the area, some of which were littered with rocks and other debris which lay scattered across the road.

Johannesburg metro police department spokesperson Wayne Minnaar said: “The protesters have been violent, however no shots were been fired (by the protesters) and no injuries have been reported.”

“The entrance to Cosmo City has been blocked off by the police,” he added.

Cars parked at a small shopping centre which houses a Shoprite and a KFC were allegedly damaged by stones thrown by the rioting group.

Some of the KFC windows were smashed and a KFC delivery truck was reportedly looted.

While emergency services tweeted that an officer had been injured at the scene, Makhubela contradicted this.

"There are no officers who have been injured, only an emergency services car has been damaged and one reported stolen,” he said.

"We are at the scene assessing the situation."

On Twitter people reported that a building was on fire and an emergency services car had been hijacked.

Malibongwe Drive was closed due to the riots in Cosmo City.

I see they&39;re demolition backrooms in Cosmos City, when is one allowed to build backrooms on bond house folks?

Stock was stolen from a truck delivering to a KFC in CosmoCity. Cars were also damaged in a protest that took a violent turn. @eNCAnews

Roads have been blocked off in parts of CosmoCity. Police start to clear debris pic.twitter.com/Vil7wc0XN5