WATCH: 'The ANC is led by clowns' - Malema 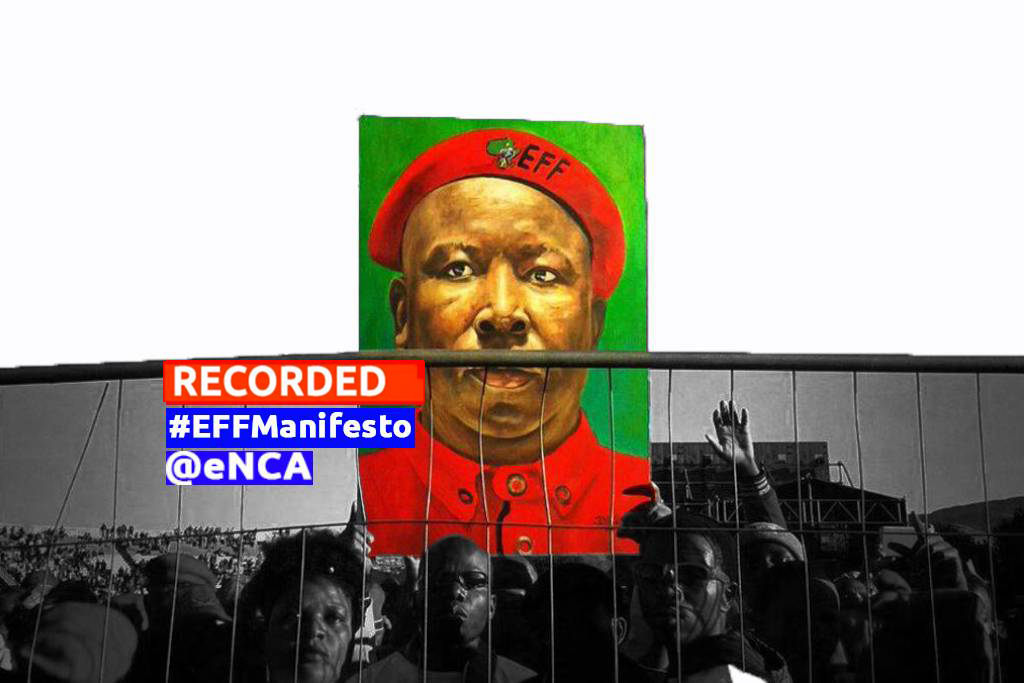 Johannesburg, 30 April 2016 - The Economic Freedom Fighters launched their local government election manifesto in Soweto on Saturday. It's the first time the party is contesting the municipal poll.

JOHANNESBURG - The Economic Freedom Fighters is rounding off the 2016LocalElections manifesto launches, as they unveil theirs at Orlando Stadium in Soweto on Saturday.

This comes after the ANC&39;s poorly-attended manifesto in Nelson Mandela Bay two weeks ago, and the DA following suit at the Rand Stadium in Gauteng a week later.

It&39;s the first time the party is contesting the municipal poll.

EFF leaders have been holding community meetings to drum up support for the event at Orlando Stadium.

The EFF sing the National Anthem but without "Die Stem". The party explain why at the EFFmanifesto. https://t.co/u4FPkD0Rli

In its first national elections in 2014, the EFF won more than a million votes.

The EFF secured 25 seats in Parliament, making it the third largest party in the National Assembly.

Party leader Julius Malema on Saturday has the privilege of addressing a capacity crowd at Orlando Stadium.

He says his party will change Parliament to reflect the people of South Africa.

EFFManifesto Malema speaks about what happened to the Guptas and the SA banks. LIVE >> https://t.co/6k4peGmsSZ https://t.co/6Nk9sg4iQ4

Malema says fighting poverty must be a priority.

"Let our priorities not be mixed up; let’s get our priorities right. Let those who are rich be patient, and be pained by the suffering of our people. Why would you be angry that there’s no bicycle lane, when there are children who go to bed without food. Let us deliver first to the last man who’s standing in the queue waiting to put bread on the table."

Malema: We want wi-fi in public spaces. It must help you access jobs EFFManifestoLaunch

EFFManifesto Malema: we want metro police officers to know under EFF they wont be allowed to confiscate traders merchandise on the streets

EFFManifestoLaunch Malema: We must allow people to sell on the streets because it keeps them off nyaope

Malema - our children must attend early childhood development. This thing of being old and can&39;t count must end EFFManifesto

Malema - we will expropriate land without compensation. EFFManifesto

EFFmanifesto Malema speaks about the use of land in EFF municipalities. WATCH LIVE >> https://t.co/6k4peGmsSZ https://t.co/3UfqdfLLDN

EFFManifesto @Julius_S_Malema: The whites must not run away. They must stay so we can learn from them. But they have too much land.

On Tuesday this past week, the ANC laid a charge of treason against EFF leader Julius Malema at the Hillbrow police station, following a controversial TV interview in which Malema said his party was prepared take up arms against the government.

Malema: You have been voting for existing parties but you still don&39;t have services.

Malema: The ANC is lead by clowns. That is why they confuse the truth with treason. You come with violence, we&39;ll respond with violence

Malema: We&39;ll never take guns to innocent people. But if you come with violence, we&39;ll defend ourselves

Watch the gallery below for the EFF&39;s 2016LocalElections build up.

Attendees being counted as the enter Orlando stadium EFFManifesto pic.twitter.com/qL5hs1rUkU

Maskandi artists from Soweto given an opportunity to showcase their talent. EFFManifesto pic.twitter.com/XHdc3N7HKu

Fighters breaking into a song as the bus goes around collecting people&39;s round the community to the EFFManifesto pic.twitter.com/IdQ363fBNA

An emotional time for others as the Snakepark bus makes its way to Orlando stadium for the EFFManifesto pic.twitter.com/oPRDvQJWvS

"If old people are still attending what we do means there is something right we are doing" ||Malema|| EFFManifesto pic.twitter.com/eqdj0va7vl

Fighters getting food and red t-shirts as they enter Orlando stadium. EFFManifesto pic.twitter.com/nm2V66zRt3

EFF ballon flying high with a Soweto view behind it. EFFManifesto pic.twitter.com/jTc2HkXqeg