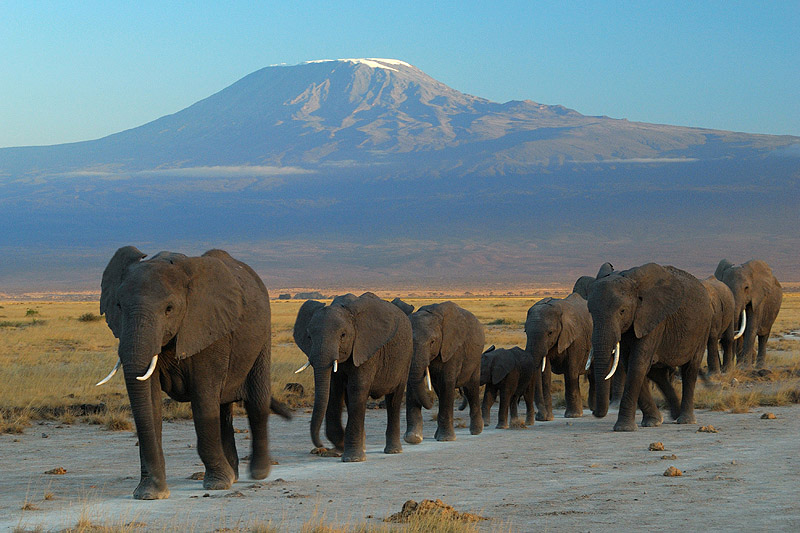 FILE image of elephants at Amboseli national park seen against the backdrop of Mount Kilimanjaro.

SANDTON – Countries participating in the 17th Conference of Parties on the Convention on International Trade of Endangered Species of Wild Fauna and Flora (CITES CoP17) in Johannesburg remain divided over the issue of ivory trade. During Monday&39;s committee meetings countries debated extensively on domestic ivory trade.

South Africa and Kenya disagreed on the fact there is evidence to support a link between CITES decisions and the level of poaching.

During the committee two session, Namibia put forward a motion to close the debate on domestic ivory trade, saying it was beyond the scope of the convention.

Namibia pushing at the first hurdle to shut down further debate on closing domestic ivory markets - they don&39;t want them closed CITESCoP17

"The need for a vote to even allow the debate on closing domestic ivory markets to start shows how emotive this proposal is and how divided countries are on this critical issue,” said Ginette Hemley, the World Wildlife Fund’s head of CITES CoP17 Delegation.

The elephant agenda  items were moved to working groups to gather a consensus. One group will focus on a review of national ivory action plans – central to global efforts to the illegal trade in ivory. The other group will discuss proposals calling for the closure of legal domestic ivory markets.

Elephant populations in Africa declined by 30 percent between 2007 – 2014. This is according to the International Union for Conservation of Nature (IUCN) Elephant Status Report 2016.

The decline is the worst in the past 25 years and is largely due to poaching over the past ten years.

The report was released at CITES Cop17 on Sunday.

The report states that there has been a reduction of about 27,000 elephants in Southern Africa since 2007.

“These new numbers reveal the truly alarming plight of the majestic elephant – one of the world&39;s most intelligent animals and the largest terrestrial mammal alive today,” said IUCN Director General Inger Andersen.

“It is shocking but not surprising that poaching has taken such a dramatic toll on this iconic species,” she said.

Another report on the monitoring the illegal killing of elephants by the CITES secretariat was presented to conference delegates.

Conclusions from the report documented “a considerable increase in levels of illegal killing of elephants in Africa between 2006 and 2011. There are strong reasons to believe that this increase has had negative consequences on elephant populations across much of Africa in recent years.

The report states that elephants killed illegally between 2010 – 2015 ran into tens of thousands.

Three proposed changes to trade controls for the African elephant that will be considered at the CITES Cop17 which will be discussed next Monday.

These proposals could change the way that ivory will be traded in the future.

Three proposals for the African elephant to be discussed at CITESCoP17 pic.twitter.com/eJ8fTPWhw1

There has been a nine-year moratorium on trading ivory in an attempt to protect the animals.

“The trade ban is just one important step I think the biggest gap is the lack of sufficient international cooperation to deal with what is a growing sophistication in crime syndicates that are running the illegal ivory trade national bans.

“These have been helpful in some cases but until we get countries working across border we are not going to crack this problem,” said Hemsley.