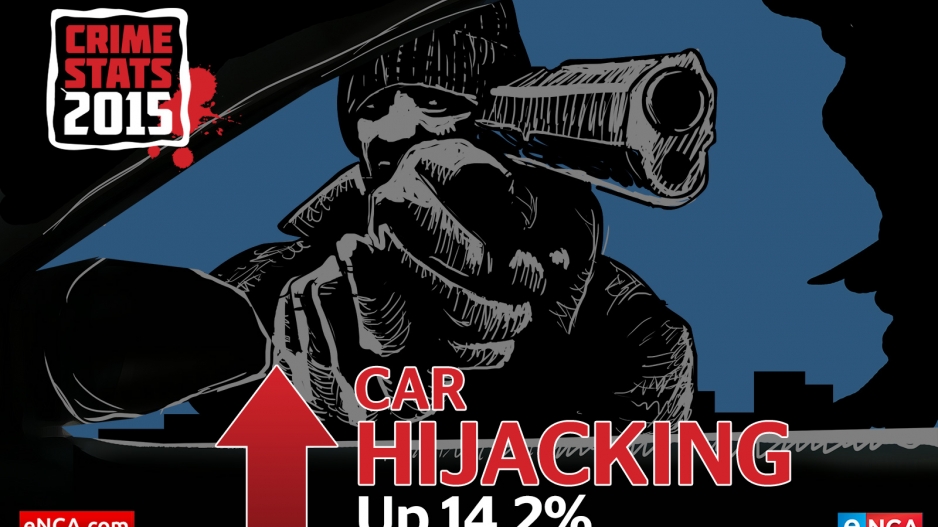 Car hijacking has increased significantly in the 2014/15 financial year.

JOHANNESBURG – You are more likely to have your car stolen, or be hijacked, if you live in Gauteng.

This is according to the latest crime statistics released by the Minister of Police Nathi Nhleko and police commissioner Riah Phiyega on Tuesday in Parliament.

Vehicle theft has decreased by 2.7 percent, but carjacking and truck hijacking have both increased dramatically at 14.2 percent and 29.1 percent respectively.

Gauteng has the highest prevalence of car hijacking and theft in South Africa, even though theft has decreased.

Frans Cronje of the SA Institute for Race Relations (SAIRR) said this is because criminals have adapted to the improved security in cars and tracking devices. They now have to resort to car hijacking.

He was speaking at a SAIRR briefing on long-term trends in the crime statistics last week in Johannesburg.

This map was created with information provided by the Intelligence Bureau.

Which vehicle is the most popular among thieves?

It’s not known which model of car is stolen the most as various insurance and tracking device companies are reluctant to comment about this.

Knott-Craig said that any information they provided on vehicle theft, based on their database, would be misleading and inaccurate.

“Tracker’s vehicle base is a) not at all representative of the national car park and b) may be skewed heavily in terms of which vehicle brands it has in its database,” said Knott-Craig.

According to Carinfo.co.za, the top most stolen cars in South Africa are as follows:

While Toyotas are the most stolen cars, it’s important to note that they are among the most sold cars in South Africa.

“Toyota do have higher sales but in reality they are known to be easier stolen,” said Christelle Fourie-Coleman, CEO of MUA Insurance which insures about 30,000 vehicles.

“According to our statistics, there has been an increase in vehicle theft and hijacking, especially in the Western Cape,” said Fourie-Coleman.

While Toyotas have a high risk of being stolen, this doesn’t mean people who drive a Fortuna or a Hilux will pay more in insurance premiums.

“Toyotas are very cost-effective to repair which makes them an attractive risk to insure,” said Fourie-Coleman.

While vehicle theft in South Africa is high – with 151 vehicles stolen and 35 car hijackings every day in 2014/2015 – Fourie-Coleman says vehicle theft is only 7 percent of the claims they pay out.

"Most claims (55 percent) are made for motor-related accidents,” said Fourie-Coleman.

Garth de Klerk of the South African Insurance Crime Bureau (SAICB) says that vehicle cloning is a common trend linked to theft and has been around since the 1980s.

“We have estimated that approximately 60 percent of stolen or hijacked vehicles go back into the domestic market to unsuspecting buyers.

"A further 30 percent goes into the export market or neighbouring countries and around 10 percent into chop shops or salvage parts,” said De Klerk.

The SAICB have released an infographic with facts and figures of the vehicle cloning trend in SA.