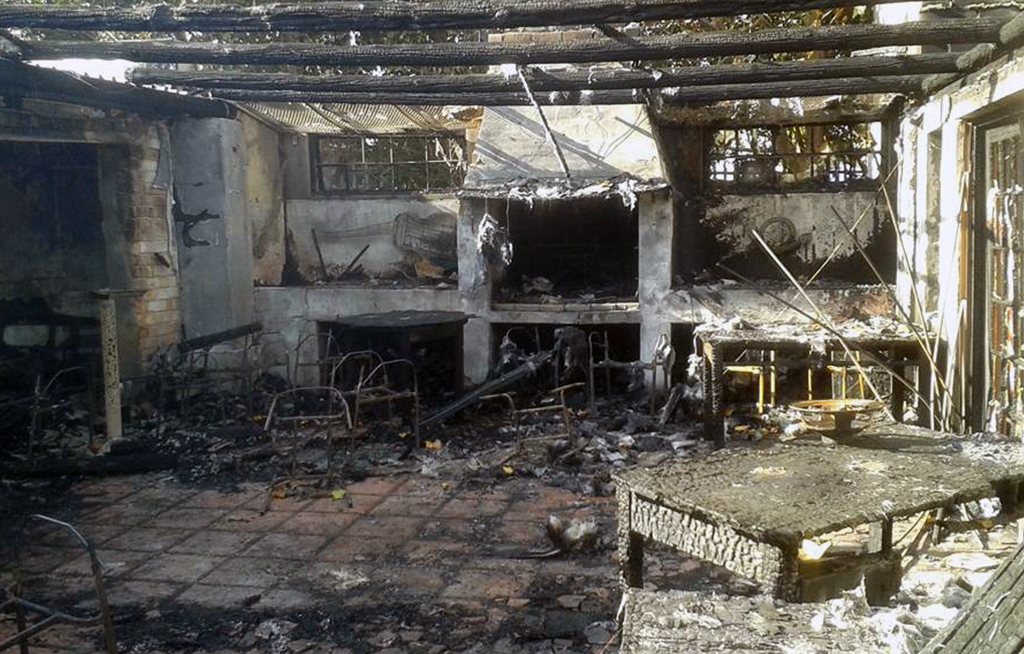 The Klein Libertas Theatre in Stellenbosch was gutted in a fire thought to have been started by an electrical short circuit on Saturday, 13 June 2015. "Everything was destroyed," said director and owner Gi-Gi Fourie.

STELLENBOSCH – An early morning fire on Saturday destroyed one of the cultural landmarks of Stellenbosch.

Gi-Gi Fourie, the director and owner of the Klein Libertas Theatre, said he noticed flames at the back of the property when he arrived there at about 6.30am on Saturday, June 13, 2015.

“When I opened up, I saw something shining,” he said. “When I went inside, I saw there were flames, there was smoke, against the back wall, in the roof.”

Fourie then called for help. Local firefighters arrived on the scene shortly after 7am.

“We dispatched three major pumpers, a rescue vehicle, a service car and a light motor vehicle,” said a source. “When I got there the flames were through the roof. It is a very old building, the wood is very dry, and we suspect that the power short-circuited.”

“The building itself dates back to 1790,” said Fourie. “That is, the original farm.”

Authorities were able to contain the blaze and prevent it from spreading to nearby properties. No one was injured in the fire.

"Everything was destroyed: the walls, the roof, the windows, the furniture, everything is gone."

Members of the local theatre community, including Die Burger theatre critic Marina Griebenow expressed their sadness on learning of the fire.

"See what our beloved Klein Libertas Theatre looks like!" she wrote in a post including images of the damage, from Henk Fourie, Gi-Gi&39;s son.

ABOVE: "It&39;s a sad day," wrote Henk Fourie of the fire which gutted the Klein Libertas Theatre in Stellenbosch on Saturday, June 13, 2015. Fourie&39;s father, Gi-Gi said he arrived on site early in the morning and called firefighters when he saw flames in the roof. SOURCE: Facebook / Henk Foure

Playwright and director Penny Youngleson on Facebook: "That is catastrophic. That theatre was our home when I was younger. So sorry."

Municipal workers and insurers are set to investigate the cause of the fire, which Fourie said could be an electrical fault.

The Klein Libertas Theatre operated from the property on Du Toit Road for 50 years.

It was one of the performance locations for the annual Woordfees festival, which takes place in and around Stellenbosch.

Fourie said the location was booked out well into next year, and theatre staff were investigating alternate venues for the productions on the calendar.