Cold front due to bring rain and snow 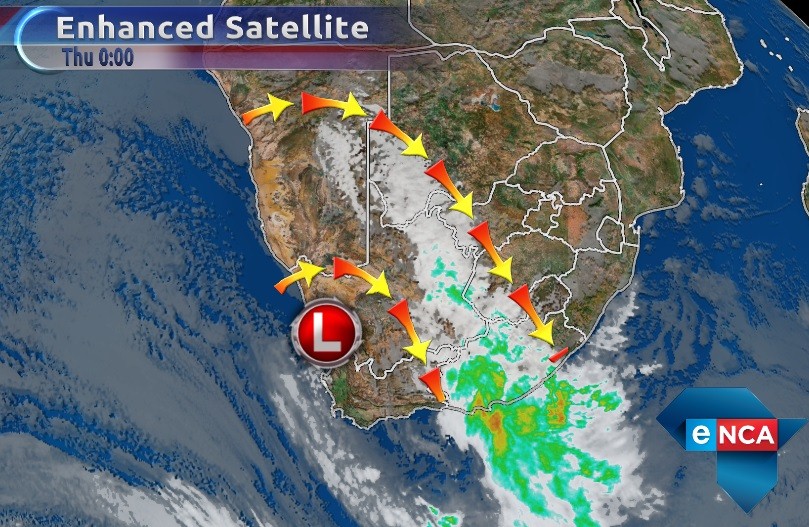 An upper air trough brought thundershowers and cloudy conditions to large parts of the Eastern Cape.

On Wednesday night and Thursday, an upper air trough brought thundershowers and cloudy conditions to large parts of the Eastern Cape, and some parts of the Northern Cape and Free State.

On Thursday, the trough is situated over the west coast, and is forming a ‘conveyer belt’ of moisture and rain to the east of it. This results in a thick band of cloud which can be seen on the satellite image below.

The trough is quickly developing into a Cut-off low (COL). On Friday the COL will intensify and move into the western parts of the Northern Cape. This will result in thunderstorms persisting in the Northern and Eastern Cape, North-West and Free State, and eventually spreading into Gauteng, parts of Limpopo, Mpumalanga and KwaZulu-Natal.

The COL will move south-eastwards on Saturday. By then, a significant amount of rain would already have fallen in the Eastern Cape. Thundershowers are expected to continue in the interior, bringing even more rainfall for the remainder of the day. Widespread and heavy rains are forecast for the Eastern Cape and much of KwaZulu-Natal. The map below shows accumulated rainfall amounts in excess of 50mm for most places in these provinces from Thursday to Saturday.

The mountains of Lesotho, the Drakensberg and the north-eastern high lying areas of the Eastern Cape will receive significant snowfalls which could amount to more than 50cm in some places up until Saturday.

Light snowfalls are already possible for the northern parts of Lesotho from late on Thursday and around Sutherland on Friday.