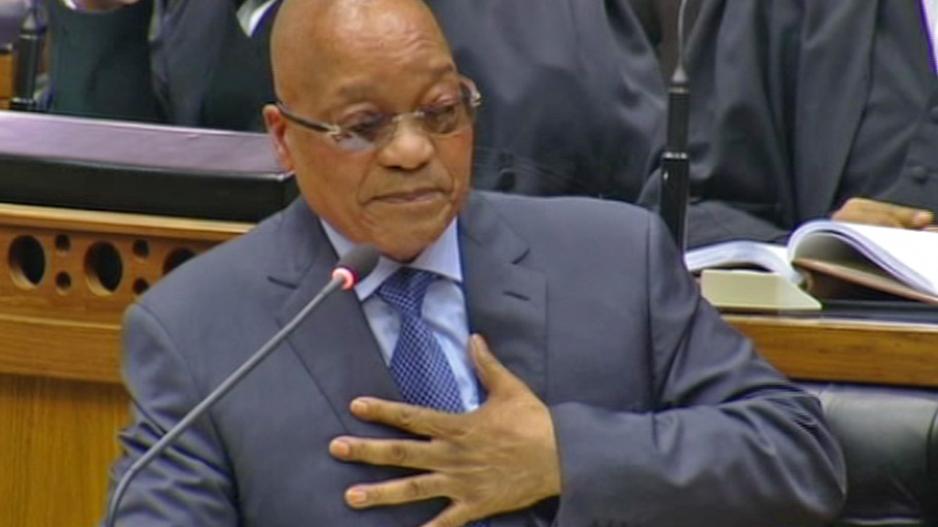 President Jacob Zuma being pushed on allegations the Gupta family was appointing ministers.

CAPE TOWN – The Democratic Alliance is considering legal action against President Jacob Zuma, the Gupta family, and others implicated in “undermining the state”, DA leader Mmusi Maimane said on Sunday.

“What has emerged today [Sunday] is the existence of concrete proof confirming what South Africans have known for some time: the ANC has created, aided, and sponsored a shadow criminal state in South Africa led by the Guptas and the Zumas,” he said.

READ: Gordhan lashes out at Eskom board

Maimane said an array of cabinet ministers, state departments and entities, and public officials had “systematically sold off South Africa to a small cabal of foreigners who are on our shores for one reason – to loot our country of its resources in order to make themselves rich. This should anger anyone who hates injustice and cares about the future of our country”.

“The Democratic Alliance has today consulted our lawyers with a view of taking legal action against Jacob Zuma, the Gupta family, implicated cabinet ministers, public officials, SOE [state-owned enterprise] executives and board members, and any other individuals who have acted to undermine the state. We believe there is a host of charges of the most serious order, including grand corruption, undermining of state sovereignty, and various statutory offences, including the leaking of classified information and undue influence in the awarding of government contracts,” he said.

Sunday’s reports revealed “written proof in the form of a string of emails which confirm that South Africa has been captured by the Guptas”. From handpicking cabinet ministers to appointing heads of SOEs, to winning multi-billion rand government contracts, the Guptas and the Zuma’s had manipulated power to create a “shadow criminal state” which operated to enrich a few and left the majority of South Africans poor and jobless.

Moreover, it was revealed that Zuma had been putting in place an exit strategy – with the help of the Guptas – to relocate to Dubai after he “is finished raiding the country of its very last cent”.

“It is clear that as the Gupta capture scandals continue to grow, a judicial commission of inquiry recommended by former public protector Thuli Madonsela must be established to swiftly investigate this matter and ensure that this corruption on an unprecedented scale is stopped once and for all. Today’s revelations make it clear as to why Jacob Zuma is opposing the public protector’s recommendations in court.

“While nine million South Africans have lost hope in ever finding work and millions more are trapped in abject poverty, the ANC allows this Gupta-headed heist of our country to proceed unabated,” Maimane said.

In fact, the ANC could remove Zuma at the sitting of its national executive committee (NEC) on Sunday. The NEC had the power to do so. Time would only tell if it had the will.

“If the ANC chooses to stand by Zuma and all his corruption again today then no one within the ANC can claim innocence for this absolute pillaging of our country by a band of connected crooks. There must be collective blame on the whole ANC for partaking, benefiting, and allowing this to unfold,” Maimane said.

The Sunday Times reported that the e-mails show the extent of Gupta control over cabinet ministers and parastatal CEOs and board members.

The correspondence also gives insight into the role of Zuma’s son Duduzane in presidential matters. Duduzane is a close Gupta associate and is believed to have made billions through this partnership, the newspaper said.

Another series of e-mails show that the Guptas were central to a scheme for Zuma and his family to acquire residency in Dubai in the United Arab Emirates. However, Zuma on Saturday denied the claim, saying his only home was in Nkandla in KwaZulu-Natal.

Along with Gupta brothers Ajay, Atul, and Tony, Sahara CEO Ashu Chawla emerge as a key player in the intricate web of state capture, the Sunday Times reported.

The e-mails revealed, among other things, that the Guptas were sent Mosebenzi Zwane’s CV a month before he was appointed minister of mineral resources; intervened to have the powers of then communications minister Faith Muthambi strengthened and were forwarded a presidential proclamation detailing her powers by Muthambi herself before it was signed by Zuma; and received confidential information on cabinet meetings from Muthambi, the Sunday Times said.

In a similar story, the City Press reported that an email trail between the controversial Gupta family and their employees had blown the lid off how they managed to do business with the government, ingratiate themselves with senior officials, and go so far as to help move Zuma and his family to Dubai.