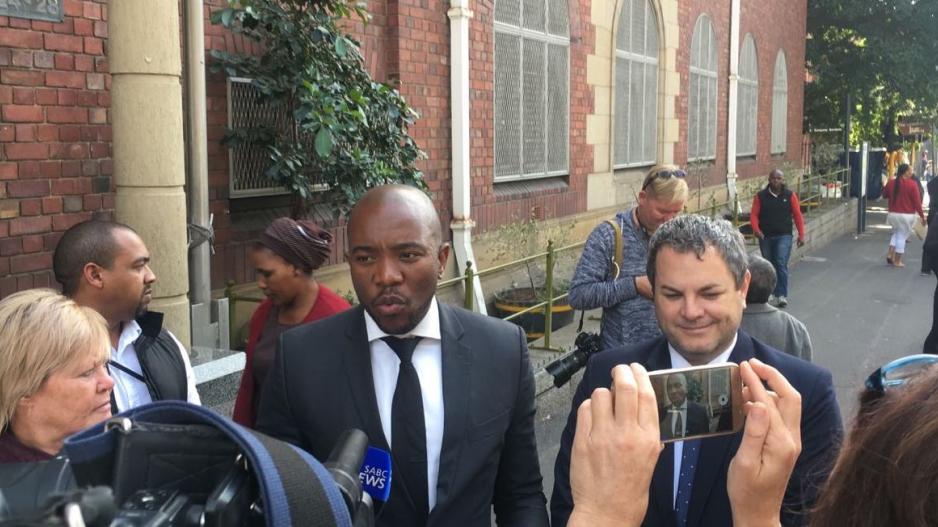 DA leader Mmusi Maimane laid charges at the Cape Town police station against the president, his son, government ministers and the Guptas on Tuesday.

CAPE TOWN – The Democratic Alliance will lay criminal charges against three Cabinet ministers on the back of further indications of executive wrongdoing emerging from the so-called Gupta leaks, chief whip John Steenhuisen said on Monday.

The charges against Van Rooyen would relate to his brief stint as finance minister in late 2015 and allegations that during those few days his advisers sent National Treasury documents to the Gupta family.

The DA will file a complaint with police against Muthambi over reports that she sent the Guptas a presidential proclamation outlining her ministerial powers, as well as confidential information on Cabinet meetings.

In the case of the embattled Brown, the DA’s charges will follow suggestions in the leaked emails of Gupta associates that they and the family had ready access to confidential memoranda in which the department expressed unease over the joint venture between the state arms manufacturer and VR Laser Asia.

The company is headed by Salim Essa, a regular associate of the Guptas, who has also been fingered in reports purporting to show that Transnet’s acquisition of Chinese-made locomotives massively benefited the family.

Steenhuisen said the DA would also bring charges against Denel chairman Daniel Mantsha for allegedly forwarding confidential emails between the company and the State Security Agency to the Gupta family.

“News reports are detailing, almost daily, how the Guptas have succeeded in capturing President Jacob Zuma and his executive, and how their influence now permeates the Cabinet and key state-owned entities,” Steenhuisen said.

Steenhuisen reiterated a call on all political parties to support a motion proposed by the DA for Parliament to set up an ad hoc committee to probe state capture.

“It has become clear that a sweeping investigation into state capture is required and Parliament, empowered by section 55 of the Constitution to oversee the exercise of executive authority, is best placed to undertake it,” he said.

For a motion to be adopted, the support of a simple majority in the National Assembly is needed. This translates into 201 votes and means that it cannot pass without the backing of a portion of the ANC majority in the chamber.

Steenhuisen said a parliamentary inquiry “can only do good” and he hoped that the ANC would come to the party. The motion would be discussed in the chief whips’ forum on Wednesday, and the DA would push for a date for it to be tabled to be scheduled on Thursday in the regular meeting of the parliamentary programming committee.