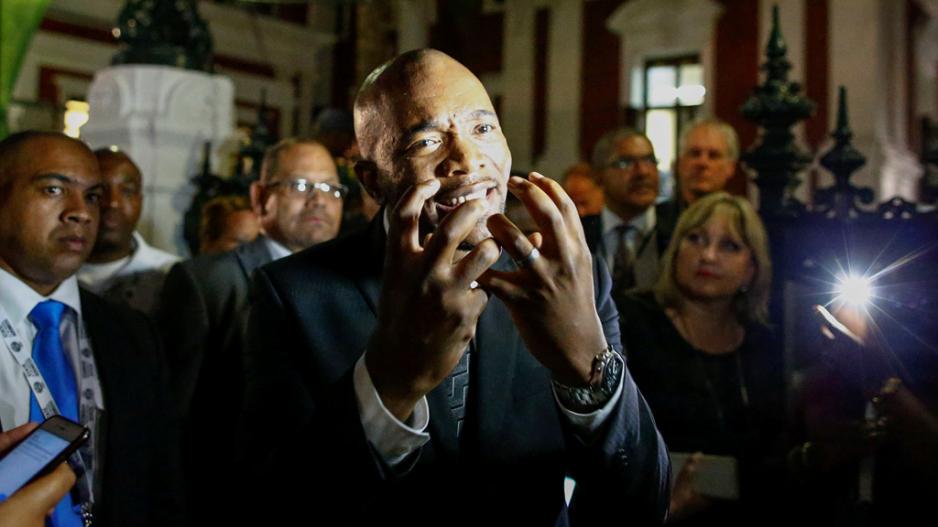 CAPE TOWN – Democratic Alliance leader Mmusi Maimane pledged on Thursday that he would approach courts, after the joint sitting of Parliament for President Jacob Zuma’s State of the Nation address descended into chaos and fistfights.

#SONA2017 The DA walk out of the House. LIVE >> https://t.co/dueJDKtUw9 pic.twitter.com/iYTbzNOtz0

“The Constitution of this Republic makes it clear that the army and the police cannot enter this chamber. Inside there, they pulled teargas, and they protected Jacob Zuma using the military and police. It has become quite clear that Parliament is now a broken institution and that (Speaker) Baleka Mbete is simply there to protect Jacob Zuma,” Maimane said, addressing local and international journalists outside Parliament.

We cannot stand for violation of the constitution: Maimane. LIVE >> https://t.co/dueJDKtUw9 pic.twitter.com/XgkuYSFwMZ

“We will be in court tomorrow (Friday) applying for a review application. Let us stand up for the Constitution of the Republic.”

Maimane said he would not be part of a Parliament which had been militarised.

“There was teargas in the gallery where all our guests were. Teargas was deployed in the gallery of Parliament. This is a serious matter which violates the very essence of our Constitution. It can’t be,” said Maimane.

Maimane then intervened as public order policing members, behind shields, pushed against hordes of news journalists who were interviewing him.

“Please open the way for the press. We have agreed that the members of the press can go through. Please allow the press to move freely. You don’t need to be doing this,” Maimane appealed.

Earlier some journalists had been prevented by authorities from doing their job.

The reporters left the media gallery to witness the removal of the EFF from Parliament but when they tried to return, they were prevented from doing so.

Journalists being prevented by SAPS from doing their work in witnesses the removal of EFF @PressGalleryZA pic.twitter.com/1ywj8gjRW5

Maimane said, “It’s become quite clear that the ANC no longer cares about the constitution. They care about the defence of a criminal president. They’ve sent the police to take on the media, who are free citizens in this country. The space that we are standing is parliament.. it is the people’s parliament. And what became very clear tonight… never before had we thought a democratically elected president would become a dictatorship against the very citizens of this country. Making PW Botha proud of the actions of the ANC!”