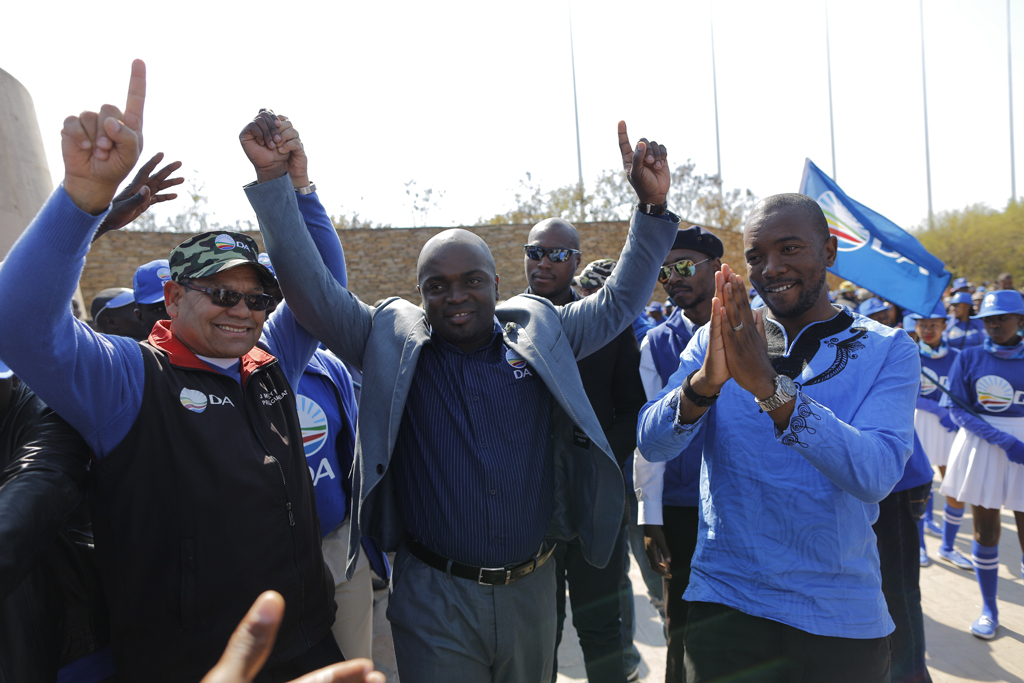 New mayor of Tshwane, Solly Msimanga (C) of the Democratic Alliance together with national leader, Mmusi Maimane (R) arrive at a victory rally held at Freedom Park, Pretoria, on 09 August 2016.

JOHANNESBURG - South Africa&39;s leading opposition party said Wednesday it would not be forming a coalition government to run the country&39;s capital, despite defeating the ruling African National Congress (ANC) in local polls.

CATCH IT LIVE: Coalitions and Kingmakers

The Democratic Alliance (DA) said talks with the Economic Freedom Fighters (EFF) had failed to produce a coalition partnership to govern Pretoria.

"We are not going to go into coalition together," the DA chairman James Selfe, told AFP.

"But we will probably, depending on their decisions and our decisions, be going into some form of co-governance relationship whereby we will probably be able to form a minority government in one or more of the municipalities."

The DA topped the August 3 vote in municipal elections in the capital Pretoria, taking 93 of 214 council seats to the ANC&39;s 89.

READ: DA wins Tshwane, but needs a coalition to govern

And with 25 seats, the EFF found itself in the powerful position of kingmaker in the municipality.

"We mutually decided that it would be problematic to try and govern together because of some fairly wide and divergent differences on fundamental policies," said Selfe.

"But we do share a common understanding that we do want to achieve some of the same objectives and while we do that I am sure that we can work together."

Coalition talks between the two parties also failed in economic hub Johannesburg, where the ANC missed out on an outright majority with 45 percent of the vote.

The DA will, however, form a coalition government with three other small parties in Nelson Mandela Bay, a coastal municipality in the south named after the country&39;s iconic late leader.

"We have concluded an arrangement with three other parties, and that will be a coalition government," said Selfe.

Led by populist Julius Malema, who was expelled from the ANC for ill-discipline in 2012, the EFF was on Wednesday due to reveal its new role following the coalition talks.

It has repeatedly ruled out a deal with the ANC.

The ruling party suffered its worst result since the end of white-minority rule 22 years ago, garnering less than 54 percent of ballots cast nationally -- an eight percentage point drop from the last local poll in 2011.

The municipal elections were largely seen as a referendum on President Jacob Zuma, whose rule of Africa&39;s largest economy has been dogged by scandal.