Table Bay name change to De Klerk will go ahead 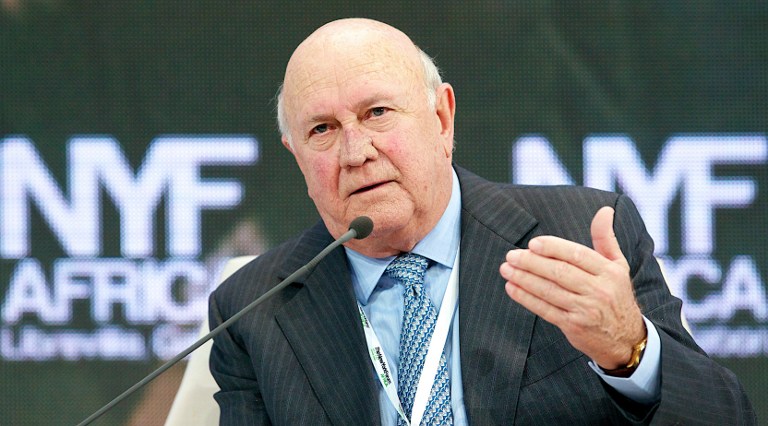 "We are going to council on the 28th of January and subject to approval in council, the remaining of the road will take place," spokeswoman Pierrinne Leukes said.

On Wednesday, councillor Brett Herron said in a statement that the proposal complied with the city&39;s naming policy.

The policy states that citizens of Cape Town and South Africa may be considered in their lifetime if they have received international recognition of the highest kind.

The 79-year-old was president from September 1989 to May 1994. He was last head of state of South Africa under the apartheid era.

In 1993, he won the Nobel Peace Prize along with struggle icon Nelson Mandela for their role in ending apartheid.

De Klerk was in favour of the idea provided the street that was to be named after him had a neutral name, his foundation reportedly told the committee. Herron said the final decision was up to the council.

On Wednesday, De Klerk said he was honoured that Table Bay Boulevard may be renamed after him if the Cape Town council accepts a proposal by the city&39;s naming committee.

"I am honoured and touched by the decision of the City of Cape Town&39;s Naming Committee to recommend the renaming of Table Bay Boulevard in my honour," he said in a statement.

"I would sincerely like to thank all those -- including many prominent residents of the Cape -- who have supported this initiative."

Both the African National Congress and the Congress of SA Trade Unions were against the name change.

"The reality is that Mandela was a liberator of the people of South Africa and a man who aspired to undo the legacy of apartheid...

De Klerk on the other hand was an architect of apartheid and responsible for implementing a system that brutally oppressed the majority."

"He was part of apartheid. He cannot be a messiah. He did not liberate us," Kodwa said.

If it were their decision, the ANC would not rename Table Bay Boulevard after the former president.

"The ANC wouldn&39;t name an institution after FW de Klerk. Renaming is part of our heritage and he played no part in our revolution," he said.