De Klerk would be in jail if I was president: Malema 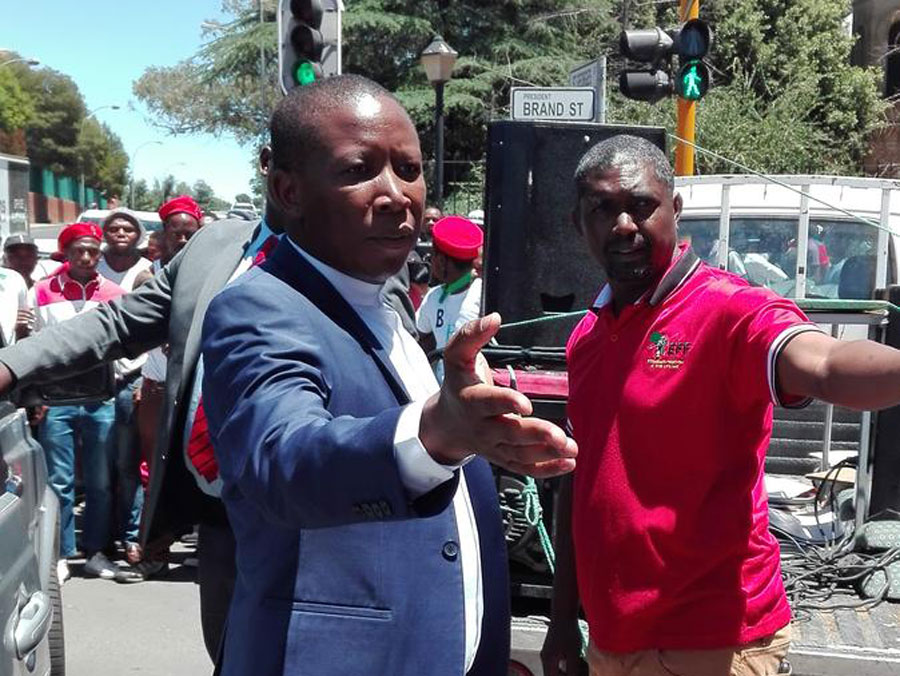 BLOEMFONTEIN - Economic Freedom Fighters (EFF) leader Julius Malema on Monday told party supporters – after his case for inciting land invasion was postponed – that former president FW de Klerk would be in jail if his party was in power.

Malema said De Klerk, as leader of the apartheid government “had presided over the killing of black people.”

Speaking outside the Bloemfontein Magistrate’s Court, Malema said: “De Klerk has no right to lecture us about incitement … he presided over the killing of our people”.

Malema added: “Every night when he go sleep, De Klerk must pray that Malema does not become president of South Africa, because if I become president, I will lock up De Klerk for the crimes they committed against black people for a very long time.

“De Klerk deserves to rot in jail … he was never punished for killing black people,” said the EFF leader to loud cheers.

“Who is he, De Klerk, to lecture me about democracy? A murderer? I will never listen to De Klerk. My wish is to see him in prison and suffering for a very long time.

“They killed our people and slaughtered them like animals. We are not calling for the slaughter of white people‚ at least for now,” said Malema.

The EFF leader was responding to criticism by the De Klerk Foundation, which has accused him of hate speech after he told supporters in Newcastle, KwaZulu-Natal, last week that white people were visitors in South Africa, and that they found black people living peacefully in the country.

The foundation has requested a meeting with the SA Human Rights Commission (SAHRC) to discuss Malema’s utterances, which the foundation said contravened the Constitution.

Former University of the Witwatersrand student leader and ‘FeesMustFall’ activist Mcebo Dlamini was in court to support Malema.

Dlamini is on bail. Advocate Dali Mpofu, who is also the chairman of the EFF, secured his bail last week after he spent several weeks behind bars on charges linked to the student protests for free education.

Wearing a black African National Congress (ANC) T-shirt, Dlamini said he was still a member of the ANC and was in Bloemfontein to support Malema’s call for land to be released “to its rightful owners”.

“We as black people remain natives and fugitives, we remain landless and living in squalor. Poverty does not care which party you belong to, it is dealing with blacks,” Dlamini said

“Today a black man is being charged with the same Act that was implemented to deal with the transgressions of the past. Apartheid used the same Act against the ANC, now it is used against the children of the struggle.

“We are going to call for land without compensation. I remain the member of the ANC, and the issue of land was the main call by the ANC … unless the ANC has shifted from that, although they haven’t said so, and that is why we are here because if we do not support the land issue as a black man then we are facing serious problems.”

Malema was charged for allegedly contravening the Riotous Assemblies Act of 1956 when he called on people to occupy vacant land.

Malema thanked the ANC for “organising a rally” for the EFF to discuss apartheid-era legislation in Bloemfontein.

“We want to take this opportunity to thank the ANC for doing a wonderful job of calling this rally today. That is why you see Mcebo Dlamini here, a member of the ANC, he came here to witness a successful rally organised by the ANC … if it was not for the ANC, we would be here in Free State today,” Malema said.

The ANC does not know how to repeal an apartheid law, he said.

“They want assistance, they do not know how to do it so they want the brain of the EFF to be used in doing away with that legislation,” said Malema.

“So [the] ANC has called us here to help them, and when we take it to the high court, we are going to demonstrate, using our own ideas, and show the court how this law is not in line with the Constitution.”