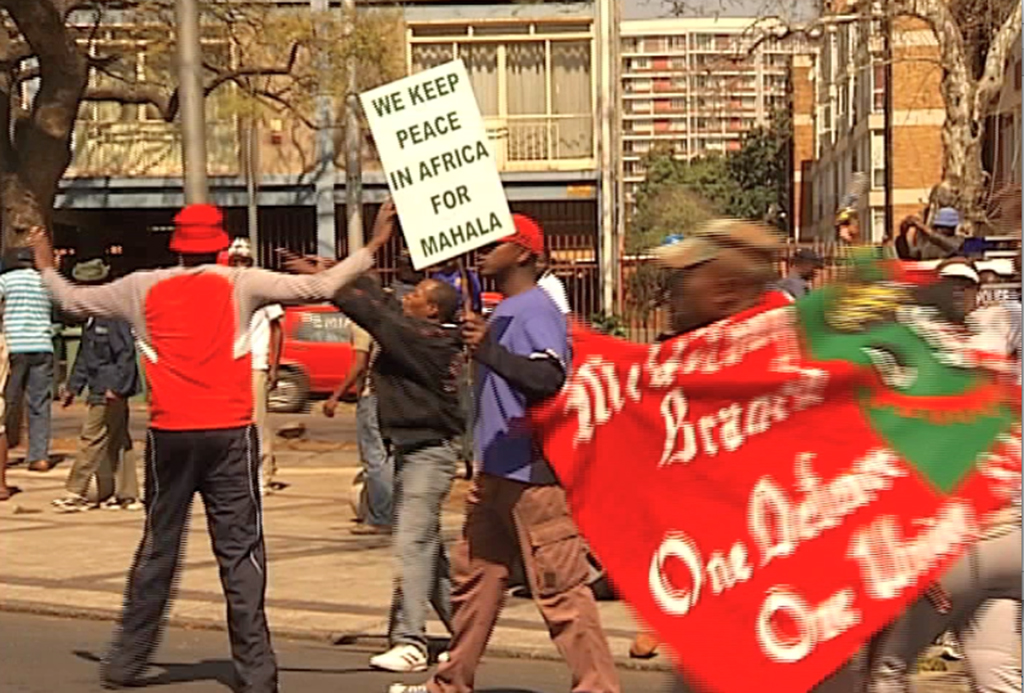 Members of the SA National Defence Force went on strike over better wages in August 2009.

JOHANNESBURG – More than Nkandla. That’s how much the SA National Defence Force has likely spent on salaries for soldiers who are currently being paid to languish at home.

eNCA has calculated that in six years, the SANDF has paid 597 soldiers more than R340- million to remain on special leave.

This after the soldiers marched over salaries in 2009 at the Union Building in Pretoria.

While the SANDF has attempted to discipline some soldiers via military courts, all those who attended those proceedings have been acquitted.

The majority of the soldiers who were placed on special leave have not faced any disciplinary process – instead living in limbo as they remain members of the defence force, but not allowed to serve.

The SANDF has been in a six-year-long legal battle with the SA National Defence Union (SANDU), which represents the majority of soldiers who marched.

On 26 August 2009, an estimated 1000 soldiers marched on the Union Buildings demanding pay increases.

Some clashed with police, climbed fences and damaged police vehicles.

Eventually a group of around 270 soldiers were tried through the military court process but where acquitted on charges of mutiny and disobeying a lawful order as a result of a lack of evidence.

The SANDF lays the blame for the six-year delay squarely at the door of the doors of SANDU.

“The legal representatives of the members through the unions, they will always challenge and take us to court. Take us to this court, interdict this, take us to that court, challenge this and challenge this. That’s the man contribution to the delay as we stand now,” says SANDF spokesman Brigadier General Xolani Mabanga.

Mabanga says the defence force is in the process of conducting “administrative discharge” processes, meaning the military still want the soldiers out.

He adds that the defence force is still in disagreement with a Constitutional Court ruling that allows soldiers to strike and to belong to unions.

But the union says the defence force is to blame.

“The question before the court irrespective of what transpired on the day in question is the procedure that the defence force has followed from day one up to now. The procedure was invalid, illegal and unconstitutional," says former SANDU president Mosima Mosima.

No choice but to pay

Mabanga says the defence force is legally obligated to pay the soldiers who remain on special leave.

Using the two of the most common salary ranges of those who went on strike  - R7000 and R9000 a month – eNCA has calculated the the SANDF has likely spent R343-million over six years paying the salaries of 597 soldiers.

Soldiers who have spoken to eNCA about being on special leave say they are frustrated about being forced to stay home.

He adds that the special leave fiasco has caused havoc in some families.

Frustrated: Nozamile Votyeka with her daughter Nikiwe, who is nicknamed "Special Leave" since she was a month old when her father went on strike with other soldiers.

"Because some of us here, we have been divorced. Some of us here, we are stressed up. Even our children, as father, you don’t get respect because if you are a father sitting at home doing nothing and then your wife is going to work and then leaving you at home. And then when she comes back, she expects you to be cleaning the houses. And then doing the washing. Everything. Now that frustrates us as a man. You must be going back to work and that’s what we want. We want to go back to work," he said.

Votyeka says she considered leaving her husband, while Lembethe says she is frustrating by her husband staying home. Votyeka&39;s daughter Nikiwe is six years old and has never seen her father work. She was one month old when he marched on the Union Buildings with other soldiers.

Until the latest dismissal process is finalised, the soldiers will remain on special leave. Indications are that SANDU and the SANDF will again face off in court before the year is through.