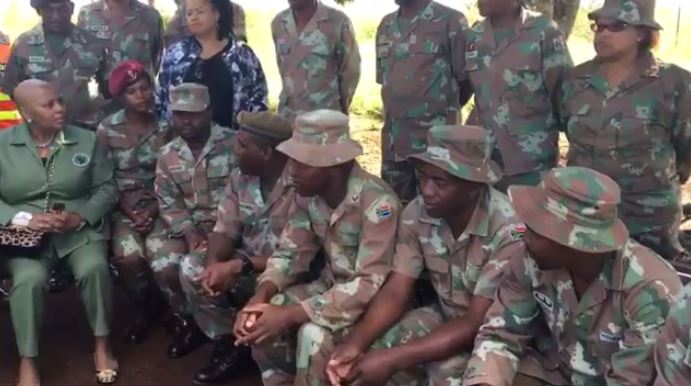 Defence Minister Nosiviwe Mapisa-Nqakula chats with some of the soldiers stationed at the border crossing between South Africa and Mozambique.

The Minister on Wednesday visited the country’s border with Mozambique to see the problems for herself.

WATCH: Our Oryx landing at the Samora Machel Memorial where he and 34 others died in 1986. #OperationCorona pic.twitter.com/Qvm49n4yM4

WATCH: If you look closely you'll see "undocumented persons" from Moz making a run for it. Can just see them running across the border. pic.twitter.com/EdrvyjANpb

WATCH: The Defence Minister chats with some of the soldiers stationed at the border crossing between SA&Moz near Mbuzini. #OperationCorona pic.twitter.com/GtPMV4O8xh

WATCH: This is what the SA/Moz border fence looks like from the air. Not bad. Upon closer inspection, there are MANY holes. #OperationCorona pic.twitter.com/9Eb28EpkRQ

WATCH:The border fence is a rickety old thing in places.It used to be electrified but no more.In parts you just walk across.#OperationCorona pic.twitter.com/z5Nh27vNvF

She met with soldiers and residents of a small community in Mpumalanga living alongside the border.

* Watch the full video report by Michael Appel in the gallery above.