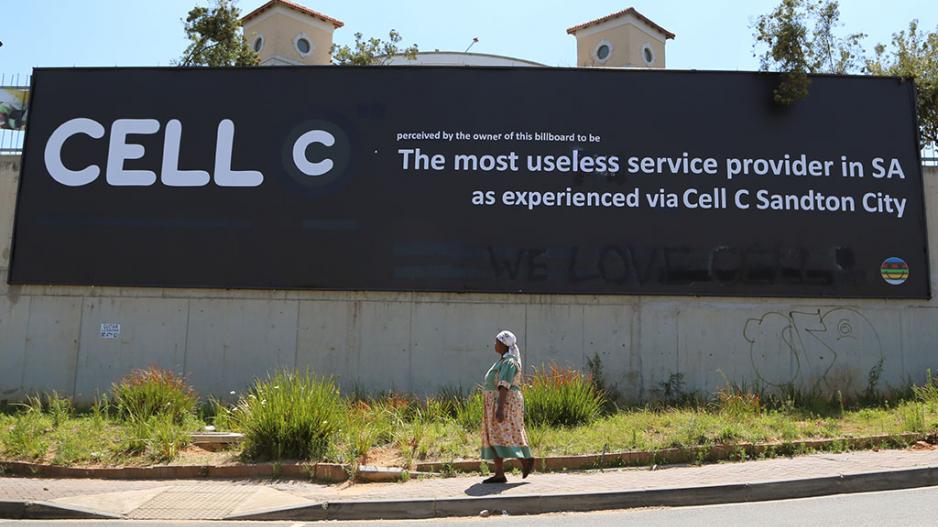 Disgruntled Cell C customer George Prokas won a legal bid to keep this billboard on a busy intersection in Johannesburg. Prokas said he repeatedly emailed and called the company to resolve a complaint, he eventually erected the banner out of frustration.

JOHANNESBURG - For the first time, businessman George Prokas has spoken out on his legal battle with mobile operator Cell C.

The owner of World Wear Mall is the man behind a billboard slating the cellular company. So far, Prokas has avoided the press.

His protracted dispute with the company over a bill of around R5,000 landed the two parties in the South Gauteng High Court two weeks ago.

Three weeks ago, Cell C applied for an urgent interm court order to have the billboard removed. The matter was heard by Judge Sherise Weiner in the South Gauteng High Court.

When the hearing began the banner had been vandalised to read, "We love Cell C."

A laywer for Prokas argued that he was a consumer advocate who took the mobile operator to task over poor service.

Prokas was furious when he discovered he had a poor credit rating months after signing up for a Cell C contract. The phone was used briefly before it had to be sent in for repairs.

However, Cell C continued to charge him handset fees and by December 2013 he owed R5,754.23. "I always said from the beginning I’m happy to pay Cell C what is due to Cell C," said Prokas.

After several attempts to resolve the matter, Prokas went ahead with the billboard on Thursday, November 6. The next day, the legal battle began.

Cell C&39;s lawyer said in court that the sign was slanderous but the judge ruled in Prokas&39;s favour. "He believed that the service was paltry and he believed that was true," said Weiner.

The operator also quibbled the inclusion of a manager&39;s contact details on the first version of the billboard, of which there were several.

"Our employee received hundreds of unwarranted abusive messages as a result of this publication," said a spokesperson.

Weiner ruled Prokas could erect a version of the banner omitting the contact details of a manager. By midday on Tuesday, November 25 the original sign was on display.

Prokas explained, "We have an undertaking that the banner can stay, excluding Van Rooyen’s details."

After Weiner&39;s ruling a City of Johannesburg spokesperson said Prokas would be served a notice to remove the sign in line with advertising by-laws.

"The city by-laws I have heard via the media," said Prokas when met with eNCA.com on Tuesday, November 25. He said he had received no notice.

Weiner had also ruled that Cell C would have to pay the legal fees incurred by their urgent interim court application.

Prokas said his legal fees, which Cell C was now liable to pay after tax deductions, cost over R200,000.

"My estimate, when I see my legal bills, I think this debacle cost Cell C a million bucks. For what? For a five grand problem?"

Karin Fourie, a spokesperson for Cell C, said the company could not comment on legal fees.

"The outstanding usage fees have since been paid in full and Cell C regards the matter as closed," wrote Fourie in an email.

Prokas and his personal assistant had received letters of praise and encouragment from other disgruntled Cell C customers.

"Cell C values every one of its paying customers. We strive to resolve issues at first point of contact," Fourie wrote.

Prokas said he was not planning on going through with the banner, even after he emailed Cell C notice of his intention.

"I think they weren’t banking on me doing the banner," he said of the operator.

It was only after the operator failed to follow through on a commitment to improve his credit rating and resolve the dispute that Prokas hoisted the banner.

Fourie disputed this in a written reply and said he had been unavailable by phone. "Cell C’s senior management attempted to contact Mr Prokas on the night that the banner went up on all of the numbers that we had listed for him in order to understand what his complaint was about," he said.

As of midday on Tuesday, November 25, the original banner was back on display.

"Today it’s been rectified to its original format. Yes. So before twelve o’clock the banner will be back to what it was," Prokas said with relish.

Meanwhile, Cell C may still pursue further legal action. "We are still considering whether to appeal and are awaiting the written transcript of the judgment," said Fourie.

City of Johannesburg spokesperson Nthatisi Modingoane said a notice was served on Friday, November 21 but to whom was unclear.

For now, the banner remains over a busy intersection visible to hundreds, if not thousands, of Johannesburg motorists.