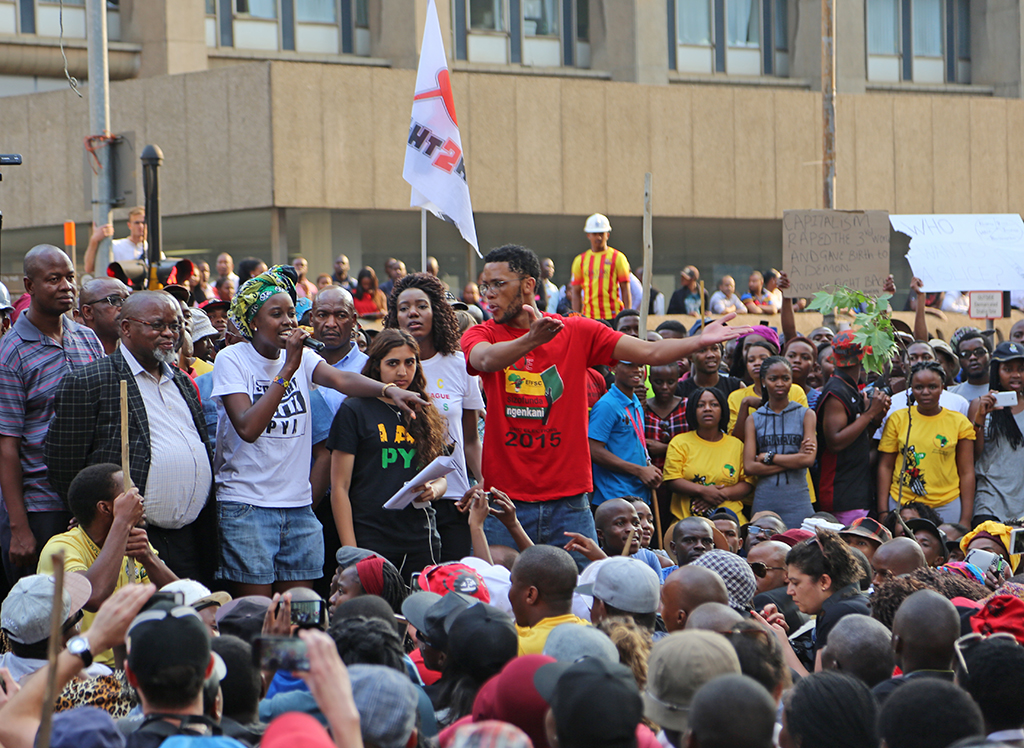 ANC SG Gwede Mantashe stands next to student leaders in front of thousands of students who had marched on Luthuli House in Johannesburg on 22 October 2015.

Shaeera Kalla, the outgoing SRC president said she was excluded from the agreement signed between the university’s management and student leaders to have academic activities resume on Wednesday.

“The SRC statement on the agreement with management was done without me, I am not aware of such,” she said on Tuesday.

Even though her term as president ends on Friday, Kalla said she has already been removed from the SRC leadership’s WhatsApp group.

Kalla told reporters she would issue a detailed statement before end of business on Tuesday.

I want to know what agreement the SRC has reached with management because I am not aware of such. Aluta Continua

The SRC statement on the agreement signed with management, which was released on Monday said the moratorium on fee increase was a victory for the students, but the fight for free education continued.

The SRC did not sign any agreement with the University management.

“The movement to fight for fees to fall and to advocate for free education continues. It must evolve into a long term plan that involves all stakeholders to engage on the matter and further provide feasible timelines and ways forward,” read the statement in part.

“However, free education is a matter of national importance and effect. It therefore requires a national plan and task team comprising of students and student leaders from across the country.”

The leaders said they needed to regroup and strategise to further strengthen their fight.

“We have won our short- term goals through short-term strategies. We have won the battle, a great battle, but the war for free education continues with a renewed strategy.”

“Therefore we will resume academic activities on Wednesday 28th October.”

Kalla and incoming president Nompendulo Mkhatshwa, former president Mcebo Dlamini and EFF Wits chairman Vuyani Pambo were praised for their unity as they led a two-week long FeesMustFall protests at Wits, which spread throughout the country’s campuses.

Divisions started to show after the march to the Union Buildings on Friday, where President Jacob Zuma announced a moratorium on tuition fee increase for 2016 on national television.

The students held back-to-back meetings on Saturday and Sunday back at the campus, but could not agree on how to proceed with the campaign for free education and an end to outsourcing of staff and services. They also could not agree on the resumption of the academic programe.

Social media was abuzz with allegations against the student leaders, who they claimed held a secret meeting under the ANC-aligned Progressive Youth Alliance (PYA) on Sunday where they were allegedly given pizza and energy drinks.

A document purported to be minutes of the meeting was posted on Twitter, with users accusing the leaders of dropping the campaign in favour of politics.

Meanwhile, a section of students supported by Wits workers held a closed meeting in the Senate House on Tuesday.

The group vowed to continue protests for free higher education. They indicated that they would march to the nearby University of Johannesburg to get more students to join their course.