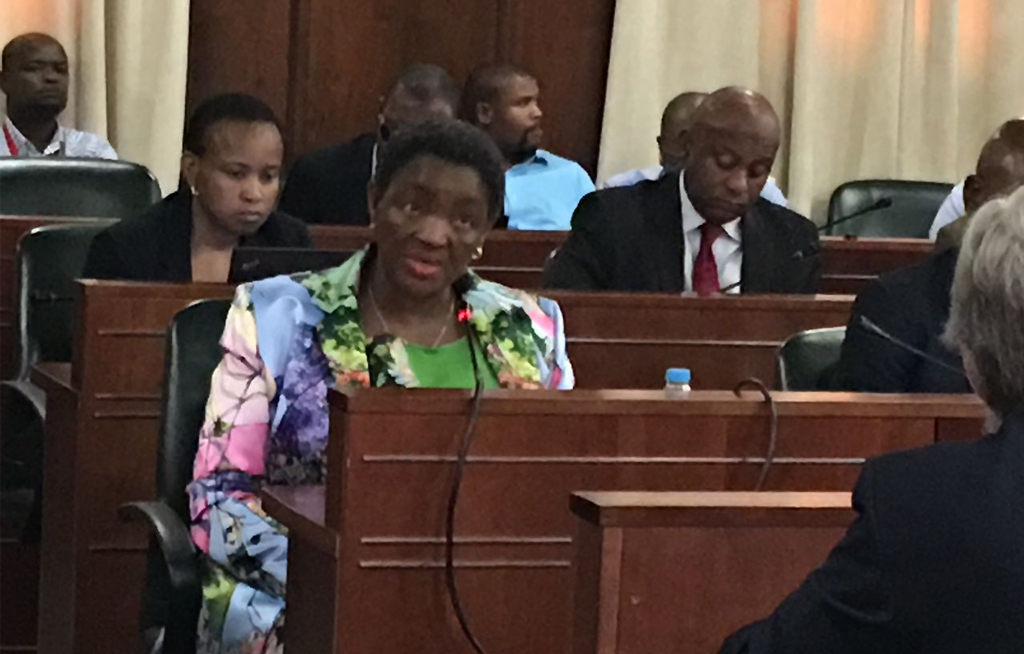 7 March 2017 - Social Development Minister Bathabile Dlamini (C) sparked outrage in Parliament when she tried to excuse herself from a Scopa meeting without taking questions.

PARLIAMENT - Outraged MPs refused to allow the social development minister from leaving parliament on Tuesday, without answering their questions.

Bathabile Dlamini was summoned before the Standing Committee on Public Accounts (Scopa) to account for how she handled the social grants payments debacle.

She had tried to excuse herself after the meeting, saying she had a cabinet meeting to attend.

When Dlamini first arrived, she explained her failure to appear before the previous Scopa session last week, saying she was engaged with other duties at the time.

"People have been counting meetings that I did not attend, but never asked why I didn't attend. But the relevant parties knew where I was," she said.

SCOPA Chair Themba Godi: we want to know how we came to this emergency point? #SCOPA

Dlamini said her department underestimated the work that needed to be done in taking over the payment of social grants.

She also said it was her idea to ask the Post Office to distribute grants, but added that welfare beneficiaries in rural areas wouldn't be able to access these pay points easily.

Dlamini: There was a time i had to fight with officials in DSD. I keep on having to say, "Lets bring in the Post Office". #SCOPA #SASSA

Dlamini added she was taken aback by concerns by the Finance Minister with Cash Paymaster Services (CPS), saying they were the only ones who could give a seamless service.

But she admitted that it's wrong to use CPS to pay social welfare grants because the Constitutional Court found, in 2014, that the tender process had been unlawful.

Dlamini says Grants must be used to forward Rad Econ Transformation. But CPS' BEE cred was revealed to be dodgy #SCOPA #SASSA

The Minister explained that Sassa missed the deadline to replace its pay-point provider because companies that bid for the contract either withdrew, or didn't meet the requirements.

Dlamini said the department was left with no other choice after facing these numerous problems along with difficulties in registering beneficiaries.

The minister also apologised to the Constitutional Court for any confusion caused, saying grants would be paid on 1 April.

Dlamini says they apologise to the ConCourt for the "unstable reports" about not being able to pay on 1 April. #SCOPA #SASSA

Dlamini: "I think this thing has been discussed a lot and making something that has not happened as the truth. " #SCOPA

"The banks that we once worked with which is the Standard Bank, still owes us, including interest, R500-million, because we had dormant accounts, and no-one has come to us to say, 'How are you going to deal with the issue of those dormant accounts and monies which have not been paid back to the department or government.'"

"Ithala Bank ... including interest, they owe us something like R1.1-billion," she added.

The minister said there was a five-year plan in place to revolutionise Sassa.