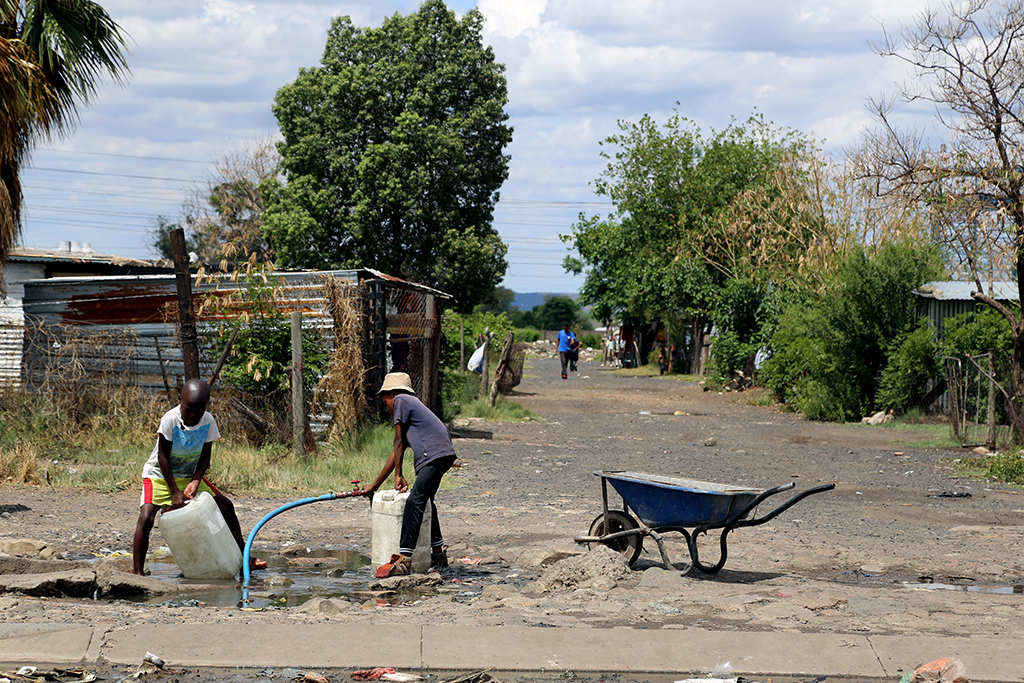 Young boys fill up 20 litre water containers in the informal settlement of Thlabane in Rustenburg, North West Province on 19 November 2015.

JOHANNESBURG – The recent El Nio event that caused one of the biggest droughts in South Africa may be over but that doesn’t mean that the country isn’t still struggling with maintaining water security.

The Department of Water and Sanitation says more rural areas have been affected by the drought than urban centres with eight provinces being declared drought disaster zones.

"We have been monitoring levels in 211 dams across the country the situation has been dire, our water levels have decreased significantly,” said spokesperson Mlimandela Ndamase in an interview with eNCA on Monday.

KwaZulu-Natal and North West province have been more severely affected by the drought than Gauteng but because of the importance of Gauteng in the country’s economy the drought gets escalated.

“Gauteng's location, the fact that 35 percent of our population is here and 45 percent of our economy is here, whenever a problem strikes this particular region we then begin to elevate it into a being a crisis,” he said.

In other words, the risk of the possibility of running out of water is much higher.

Below we have answered five questions, which help give insight into why South Africa is struggling to solve the current drought crisis.

A threat of fines and water tariff increases have been introduced in the City of Johannesburg while Ekurhuleni has introduced water shedding between 9pm and 5am.

Are these interventions working?

Watch the story by eNCA reporter Sikilelwa Mdingi below to find out:

The City of Cape Town has approved level three water restrictions even though their dams haven’t reached a dangerous level yet.

This means that businesses like car washes will be affected. Informal car washes are only allowed to use buckets and commercial car washes have introduced special interventions to comply with industry standards.

Watch the story by eNCA reporter Athi Mthongana to learn more about how this works:

3. How is poor infrastructure making the drought worse?

It’s been reported that an estimated 37 percent of South Africa’s water supply is lost to leaks every year.

This is comparable to losing eight dams of water, the size of Hartbeespoort Dam, every 12 months.

Another problem the country faces is the lack of infrastructure available to treat wastewater.

“South Africa currently produces just over five billion litres of sewage everyday and we only treat about 16 percent of that to a level that is safe enough to be discharged into rivers or dams.

“The rest gets returned untreated or at best partially treated into our rivers and dams daily,” he said.

Listen to the full interview with Professor Anthony Turton below:

4. To what extent are we responsible for the drought?

It’s amazing how a natural weather event like a drought can make humankind reflect on its own behaviour.

The current drought is a perfect example of this when we consider the impact of climate change on our normal weather cycles.

“There’s almost complete certainty that humans are causing climate change and the reason we’re doing that is because we’re burning fossil fuels,” she said.

The major problem is mining and coal-fired power.

Coal fired power-stations are big emitters of carbon dioxide (CO2), a major contributor to global warming which is caused by increasing concentrations of greenhouse gases in the atmosphere.

“South Africa is now in the top 20 emitters when it comes to CO2 so the big solution is that everybody in the country, should start pushing for and using renewable energy,” she said.

Listen to the full interview with Greenpeace Africa’s Melita Steele below:

5. Why do we struggle to save water?

This journalist has written the sentence, “South Africa is a water-scarce country” far too many times to count. A simple Google search results in this seven word sentence appearing as a headline in at least five different news website in the last six years. The demand for water in the country is far higher than what’s available.

Yet South Africans are slow to wake up to the reality that our taps will flow with water for until Jesus comes. Why does it take a long time to face the reality?

Steele says South Africans are “slow to adapt to change.”

enca bianca“You have to see something and faced by it head on, it has to be drastic. This talk about the drought has been going on for more than a year now with the South African Weather Service warning that this is only going to get worse.”

She said South Africans thinking that the recent flash flooding in Gauteng doesn’t mean the drought is over.

“Unfortunately that’s not the case and its going to take 3 or four years to recover from the drought and so what that means is that South Africans cannot continue using the water the way that they have,” said Steele.

Even if in three - four years time when the drought is over, those seven words, “South Africa is a water-scarce country” would be well worth remembering in the effort to conserve water for future years to come.