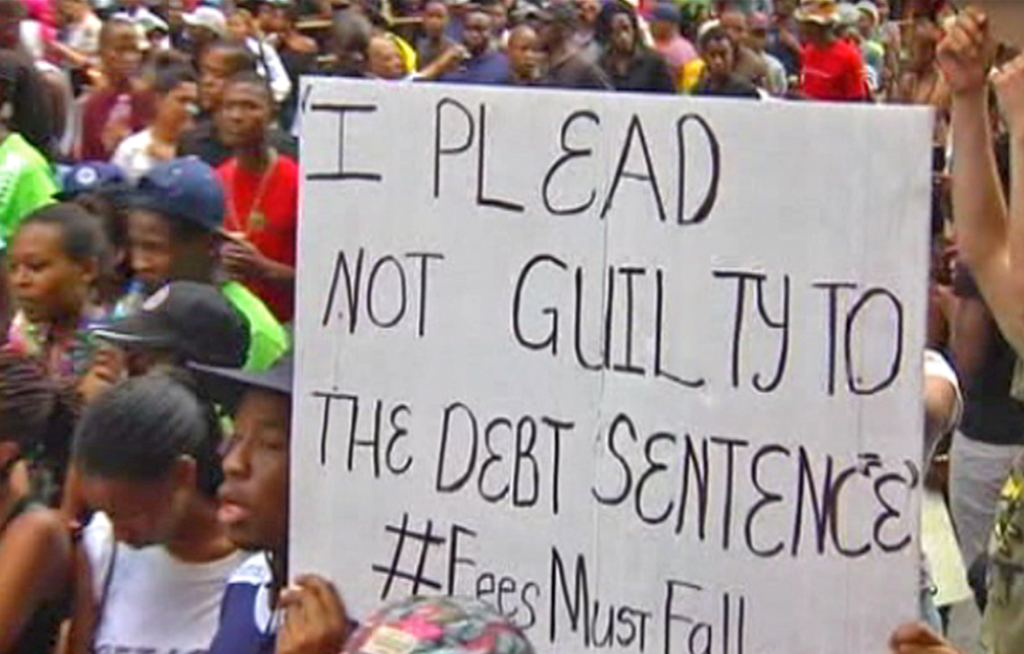 Johannesburg, 22 October 2015 Students marched through Johannesburg's CBD over university fees, before gathering outside the ANC's headquarters where they listened to speeches, sang and chanted.

JOHANNESBURG - The Council on Higher Education (CHE) released a report providing advice on university fee adjustments for next year on Friday.

The CHE responded to a request from the Minister of Higher Education and Training, Blade Nzimande on the development of a framework to regulate fee increases in higher education beyond 2017.

The first part of the advice is slated to be released before the end of the year depending on contributions from related projects and task teams.

A task team assembled by the council has divided the task into a short term phase, presenting advice for 2017, and longer term solutions that will be developed over time.

The short term phase was presented due to "the volatility in the higher education sector triggered by the fees issue".

According to the report "an economic study of the effects and implications of different levels of fee adjustments for 2017 was undertaken. From this model, a number of different scenarios were projected and considered."

The overall context of the individual universities&39; income and expenditure was considered, using audited figures from 2014, from which different scenarios were estimated.

The report stated, "Having considered the scenarios presented by the task team, the council found that an across the board fee increase at the level of the Consumer Price Index (CPI), to be the most defensible..."

The council stated their reasons for choosing to recommend a blanket increase, "There will be no real cost increase to students in Scenario A between 2016 and 2017, except possibly in respect of residence fees in some universities if the break-even principle were followed. While 10 universities would be in a worse financial position in this scenario, the universities overall would recover from the deficits of 2016/17."

The CHE asserted that implementing students&39; demands for a 0% increase would leave 19 universities in a worse financial position and combined with underfunding would threaten the sustainability of the higher education system.

The council advised against the third proposed scenario, of the CPI plus two percentage points because it would be a real fee increase for students.

The report stated, "in the context of years of higher than inflation fee increases, is also not sustainable."

One of the recommendations that the council gave were that universities all agree to the same position on fee increases and make a commitment through their representative body, Universities of South Africa.

The council suggested that universities communicate with all interested parties, particularly students and that "any proposed fee adjustment to be accompanied by a further measure of redress for poor students."

The report was released in the wake of the indefinite postponement of a fee adjustment for universities by Ndzimande.

The South African Students’ Congress (SASCO) at the University of Cape Town (UCT) released a statement in response to the postponement expressing their concern.

SASCO asserted, "The President then announced that there would be no fee increments in all institutions of higher learning in the country for the year 2016. This was a step in the right direction as it demonstrated commitment towards free quality education."

They mentioned their disappointment with the pace of the Presidential Commission&39;s progress and attempts at UCT and other institutions to discuss percentage increases on fees.

The organisation called on the minister and UCT to "rethink their attempt to insult and disregard the views of students".

"We maintain that there should be no fee increments in any institution of higher learning. The only discussions we are willing to engage in is a discussion that will shape and pave a way forward in terms of a funding model that would see the rolling out of free quality education," SASCO insisted.

The student body cautioned, "We would finally warn these above mentioned stake holders that failure to abort this anti-working class project of fee increments and extending of the date of submission for the report will result in us mobilizing students like we have done in previous years to render our universities ungovernable. We will bring these universities to a standstill."