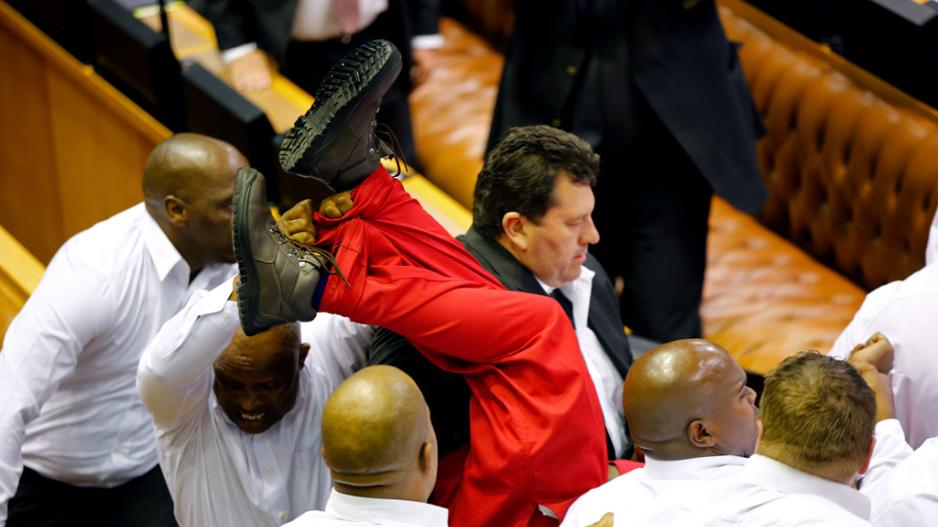 Security officials remove members of the Economic Freedom Fighters during President Jacob Zuma's State of the Nation Address (SONA) to a joint sitting of the National Assembly and the National Council of Provinces in Cape Town.

However, African National Congress MPs, who were in the majority, drowned out the opposition MPs' chants by shouting "ANC" loudly.

Zuma ignored the EFF and shook hands of MPs as he entered along with Speaker Baleka Mbete.

The EFF continued seeking to prevent Zuma from delivering his Sona, raising numerous points of order and requests, including that they be protected from police ready to attack them with cable ties and “biological weapons”.

This drew a warning from Mbete that they were “abusing all of us”.

“We are not going to sit here the whole night listening to you raising points of order … we have ruled and we are not intending to waste endless time because you have a right to raise a point of order,” she said.

Zuma had begun his speech by welcoming the chief justice, Deputy President Cyril Ramaphosa and other dignitaries but was barely audible as the EFF clamoured to prevent him speaking.

EFF leader Julius Malema claimed that 21 police officers had been disguised as parliamentary security personnel and armed with cable ties and “biological weapons” to attack the party.

His deputy Floyd Shivambu demanded an undertaking that the EFF would be treated fairly and that they were "not going to have SAPS invading the House, violating the Constitution”.

But Mbete said she could not act on “hearsay”.

“It should not be a rumour because it came from an opposition [MP],” Malema retorted.

“We are raising a simple matter that this cable tie, we took it from a security guy outside and all of us should enjoy your protection. A caring speaker who is concerned about all members of Parliament and their safety,” he added.

From there it was downhill as EFF MP Godrich Gardee rose to remind the joint sitting that the Constitutional Court had, in the Nkandla case, found that Zuma had flouted the law.

ANC chief whip Jackson Mthembu stood up to defend Zuma against what he termed a “frivolous” motion.

“This Parliament has decided not to remove the president on the basis of what the honourable member is raising today, it was put to the house, the motion was defeated by the house. We cannot go back.”

Malema made a counter point and was soon shouting at the chairwoman of the National Council of Provinces, Thandi Modise, after she said he was not raising a point of order.

“Mr Zuma has collapsed his own right to address us here.”

'Mr Zuma, please leave baba, you are a constitutional delinquent,' he said.

At this Modise asked the EFF to sit down or leave the chamber.

But the EFF continued with their disruptions, despite President Zuma’s attempt to proceed with his speech.

The EFF's Willie Madisha was the first to be removed when Modise called in parliament's protection services, after he refused to leave when requested to do so.

Next aim was taken at Malema, who was told to "please leave the chamber..." by Mbete.

Malema said he would leave, but first directed a tirade at the speaker as riot police approached the Poorthuis entrance to Parliament.

When interrupted again with a request to leave, he retorted, "I'm not going anywhere!"

"We will assist you to go, " Mbete said in return.

And then the "white shirts" came in, and a fight broke out.