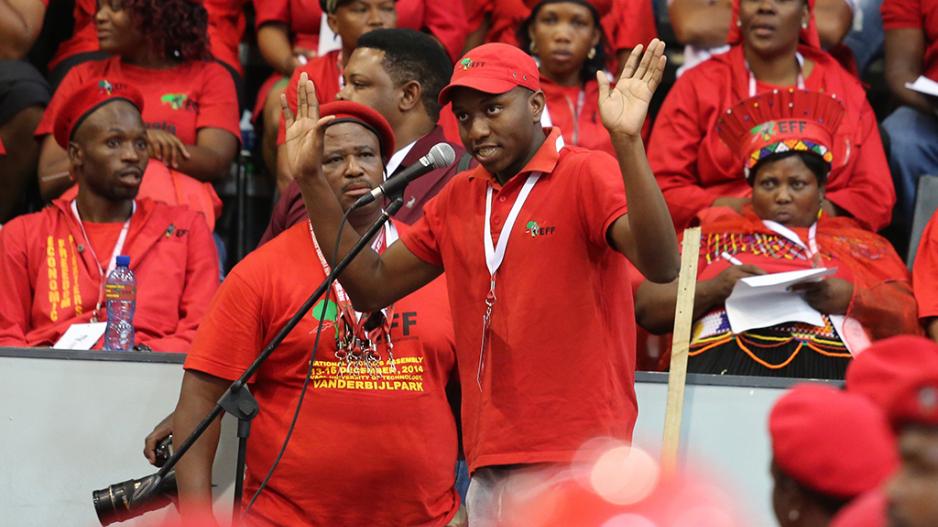 An EFF member who was not allowed to speak is seen with his hands up on 15 December 2015. It was on day three of the partys National Peoples Assembly held in Bloemfontein. Picture: Lenyaro Sello/eNCA.

BLOEMFONTEIN - In marked contrast to the chaos caused in National Assembly sittings, the Economic Freedom Fighters continued their elective conference without incident in Bloemfontein on Monday.

The 2600 delegates have thus far heeded the rules, printed on the back of the conference programme, which includes refraining from taking off their clothes "to demonstrate anger or happiness", or displaying banners declaring support for candidates.

No weapons or alcohol consumption were allowed in and around the venue, on the University of the Free State&39;s campus. Party members kept the venue clean and did not disrupt proceedings.

Party leader Julius Malema warned delegates on Sunday to refrain from "anarchy and being staff riders". The party would deal with those causing problems within the party, he said.

The only note of drama came when national co-ordinator Mpho Ramakatsa accepted nomination for secretary general on Sunday, only to be upstaged by Mpumalanga&39;s Godrich Gardee.

Some delegates were prevented from leaving the venue following Gardee&39;s nomination and election.

Most delegates on Monday stayed away from discussions about the party&39;s manifesto and the state of the party.

On Tuesday, 35 additional members would be elected to the party leadership.

Delegates said they were not allowed to speak to the press during the conference.

Late on Monday afternoon security was increased at the entrance of the university. Police and security guards searched every vehicle entering the premises. Those who had cooler boxes containing alcohol were asked to leave them outside.