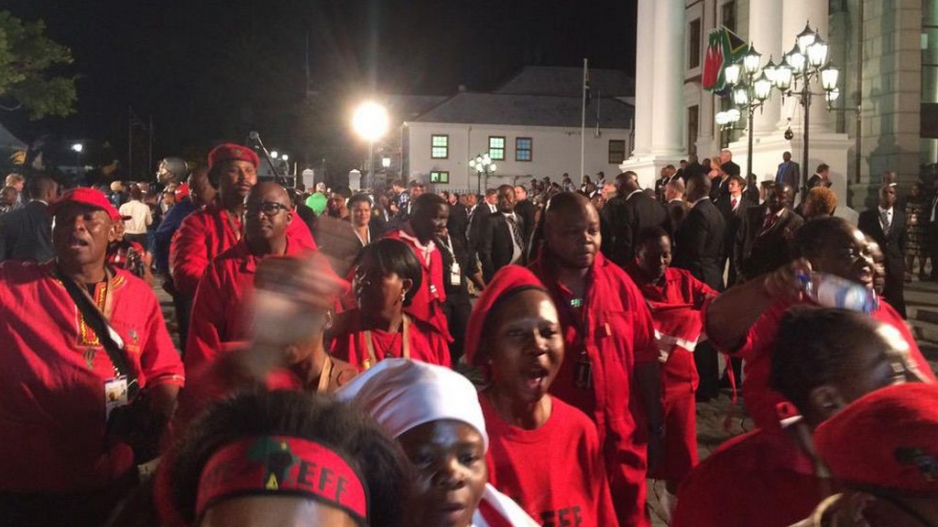 Other EFF MPs protested on their behalf.

"Sizo lala la [we going to sleep here]," one of them shouted.

Mbete ordered that security be brought into the House to remove the MPs.

"I ask the Parliamentary service officers to please come in and take out the honorary members," National Speaker Baleka Mbete said.

"I also ask the security officers to assist."

Earlier, Julius Malema had asked Mbete to show him which rule prevented him from asking questions during the president&39;s state of the nation address.

"Point us the rule that gives you power to deny us this," he said.

Mbete told Malema that she would not allow any other points of order to be raised.

Mbete then told EFF Floyd Shivambu to leave the chamber after he also tried to ask a question.

"I now have to ask that you leave the chamber, because it is clear that you are not prepared to cooperate with us," she said.

EFF national spokesman Mbuyiseni Ndlozi told Mbete she was not a bishop.

"I&39;m appealing to your conscience honourable speaker," he added.

At around 7.42pm, Malema, hat in hand, left Parliament.

Julius Malema leaves the NA to his office. His shirt is torn. @eNCAnews pic.twitter.com/t6ftnZiwqA

EFF members come to chant Pay back the Money outside the National Assembly @eNCAnews SONA2015 pic.twitter.com/Q9dL8EJpBm

Julius Malema makes a statement on the steps of the National Assembly @eNCAnews pic.twitter.com/IXXLYv0O7S

Malema : we are very happy with the courage of the DA. @eNCAnews SONA2015

Thank you to all those who made pictures and video of our illegal eviction for asking a simple question. SONA2015 pic.twitter.com/9hxAIvh6Tz""

Tweets about SONA2015 AND (FROM:@diannehawker)