EFF to head to court if suspensions go ahead 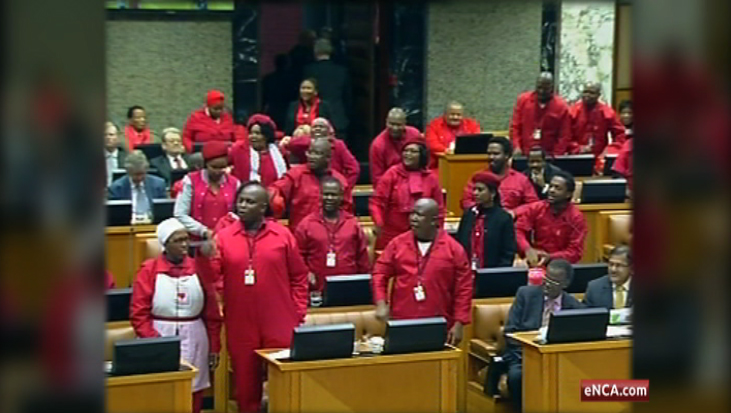 CAPE TOWN -The EFF has threatened court action should the National Assembly approve a recommendation by Parliament&39;s powers and privileges committee to suspend 12 of its MPs without pay.

"We are not shocked. They reached the conclusion that they have because as we said, there was a clear mandate from Luthuli House [ANC headquarters] that the EFF must be dealt with in the harshest possible terms," Economic Freedom Fighters spokesman Mbuyiseni Ndlozi said on Friday.

"We will meet them in the National Assembly when they make those recommendations and object to it, failing which we&39;ll approach a court," he said.

The committee will adopt its final report on Monday, following which it will be submitted to the National Assembly for approval.

Malema was found guilty on four charges of contempt of Parliament.

Shivambu and Ramakatsa were convicted on seven charges each.

The second group of MPs, consisting of Elsabe Louw, Ngwanamakwetle Mashabela, Nthako Matiase, Hlengiwe Maxon, Magdalene Moonsamy, and Andile Mngxitama, who were found guilty on two charges each of contempt of Parliament, also face suspension without pay, but for a shorter period.

"The committee resolved to recommend that they be suspended for 14 days without remuneration," said Mashile.

Another eight EFF MPs, who were only found guilty of one charge each, could get off with lighter penalties.

"The committee resolved to recommend that these members should apologise to Parliament verbally in the manner determined by the House," Mashile said.

The disciplinary process arose from the EFF&39;s disruption of the National Assembly during President Jacob Zuma&39;s question time on August 21.

They were apparently unhappy with Zuma&39;s replies to questions about his private home in Nkandla, KwaZulu-Natal, where R246 million of taxpayers&39; money was spent on upgrades.