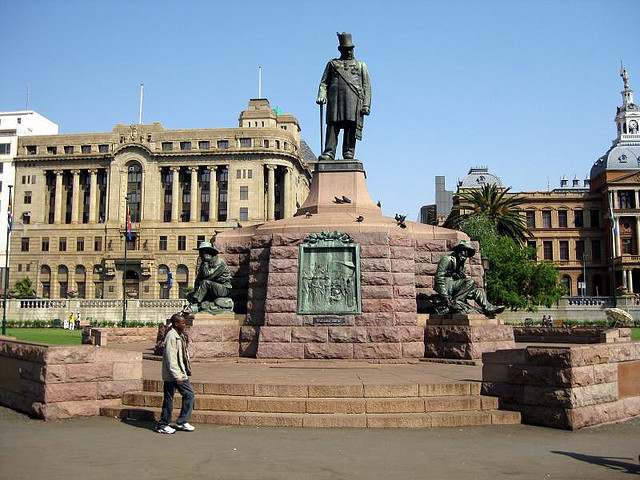 The Economic Freedom Fighters (EFF) has called for the removal of Paul Kruger's statute in Pretoria, vowing to destroy what it has described as symbols of white supremacy and apartheid.

JOHANNESBURG - The Economic Freedom Fighters (EFF) has called for the removal of Paul Kruger&39;s statue in Pretoria, vowing to destroy what it has described as symbols of white supremacy and apartheid.

The giant bronze statue of Paul Kruger -- the fifth president of the South African Republic or the Transvaal -- is situated in the heart of the capital city in Church Square.

&39;Oom Kruger&39; as he is affectionately known has stood tall over Church Square for six decades, attracting hundreds of visitors each day.

But it seems his future there is now uncertain.

Tshwane Mayor Kgosientso Ramokgopa has called for wider consultation on the Paul Kruger statue, as part of his support for calls by the ANC youth league for the statue to be relocated.

The EFF on the other hand is adamant that the statue should be removed.

“We are not going to wait to submit petitions and memorandum we are going to destroy that statue one way or another,” he added.

@FloydShivambu Next is Paul Kruger and On the 16 april before Jakobo Zumerrrrr start his Q&A, that Botha must kiss the ground.

@Jab0001 We were ignorant about race then. We now know much more. What about Andries Pretorius, Paul Kruger, FW de Klerk with non-white dna?

South Africa has no idea about LEADERSHIP... What will be gained by demolishing Paul Kruger stature ??

The fascist @EconFreedomZA want to destroy the statue of Paul Kruger...

@SayEntrepreneur Mandela or Biko&39;s statue wud fit Church square perfectly, DOWN with the oppressors DOWN!!!!

Anyone who wants a Paul Kruger statue can buy it and put it up at your farm or your house. Teach your kids about him and murderous past.