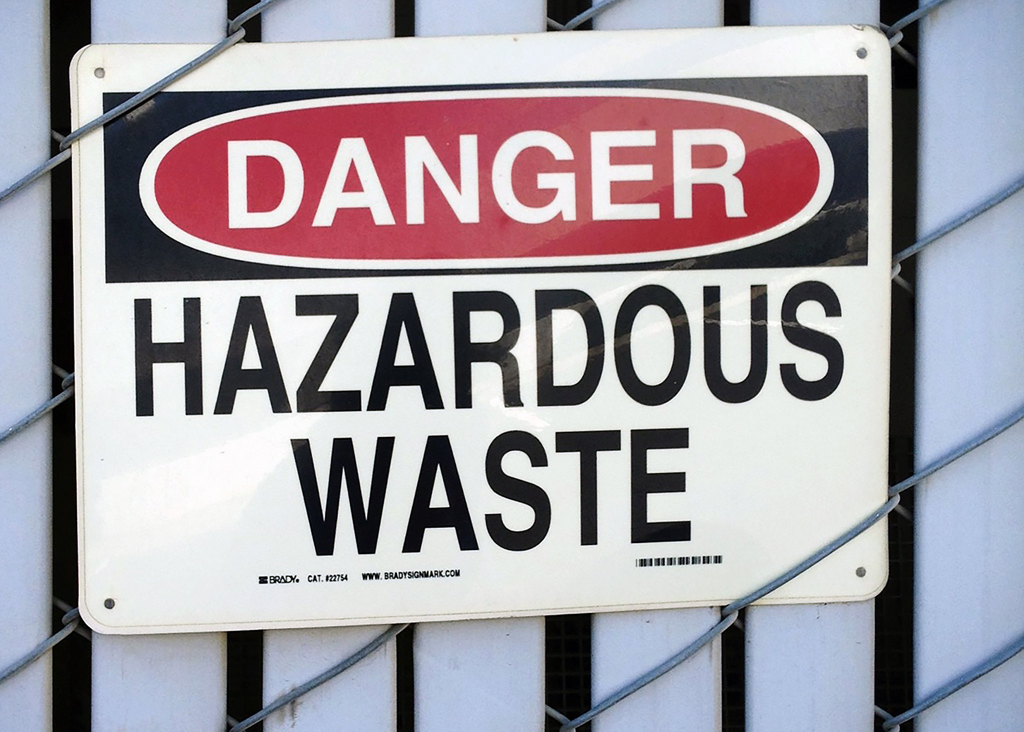 File image of a danger sign warning of hazardous waste in the area.

DURBAN - A company that has been at the centre of a toxic stench row over a landfill site that it operates on Durban’s outskirts has until Wednesday to convince Department of Environmental Affairs (DEA) not to close the site, the department said on Friday.

“A notification of the Department’s intention to suspend or revoke EnviroServ’s waste management licence was issued to EnviroServ [on Thursday]. The company therefore has four days in which to make representations as to why the Department should not suspend/revoke the licence,” spokesman Albi Modise said.

The Shongweni landfill has incurred the wrath of local residents from urban and rural communities in the area who claim that toxic fumes from the landfill have been making them sick.

He said that the department had completed investigations in relation to a criminal charge of contravening the National Air Quality Act that had been opened last September at the KwaNdengezi police station, after a search and seizure warrant was executed earlier that month at the landfill.

“The National Prosecuting Authority is currently in the process of reviewing the docket and will thereafter make a decision on whether or not (and which parties) to prosecute,” said Modise.

Modise said the notification to suspend or revoke EnviroServ’s licence was prompted by the findings of a series of investigations by the Green Scorpions in collaboration with the eThekwini Metro Municipality during January 2017.

The latest investigations followed a significant increase in receipt of malodour and health related complaints from residents linked to the operations of the landfill site.

It is licensed to receive hazardous waste, but receiving Type 1 waste (extremely dangerous) was suspended by the DEA last year as part of a compliance notice served on the company.

“Despite many interventions implemented by EnviroServ to comply with the instructions contained in the compliance notice, there is still an unacceptably high level of landfill gases being emitted from the Shongweni landfill site, which the authorities have confirmed to be the cause of many of the communities’ complaints,” Modise said.

The Enviroserv Shongweni Landfill must shut down or be moved away from Black townships. Sign up for campaign here: https://t.co/Wc87zDAXRO

EnviroServ initially denied responsibility, but after continued complaints and independent testing, Dean Thompson, the company’s chief executive admitted publicly that the company was “partially responsible” for the malodours. He said that other industries in the area needed to be investigated for their contribution to the stench.

Modise said EnviroServ had objected to some instructions contained in the compliance notice that was served on the company last year.

“EnviroServ formally requested that certain instructions contained in the compliance notice be suspended until the objection process has been completed. Both the suspension request and objection are currently being considered by the director general and minister, respectively.”

“The validity period of the permit is now being reviewed on a monthly basis instead of doing so annually. This was done in order to ensure that EnviroServ made significant and meaningful progress towards the resolution of issues contributing to off-site impacts,” he said.

On Friday, Thompson said he was surprised to receive the notice of intention to suspend or revoke its licence.

“We will motivate fully why this is not necessary given the facts at hand. In the interim we remain a compliant and legal site,” he said.

“It is unfortunate that the department has succumbed to public opinion and has been forced to inexplicably deviate from the agreed remedial processes that we have complied with, and will continue to implement.”

He said the company was dismayed that its “numerous detailed submissions made to the department have not been considered and responded to. Had this occurred, we are confident that the current situation might not have arisen. We have also not received any feedback as to the Department’s investigations into other odour sources”.

“With the DEA’s permission, we have reverted to treating incoming waste to the Minimum Requirements standards that existed prior to the introduction of the Waste Management regulations during August 2013,” he said.

“This has been the primary cause of the recent odour problems experienced at the site. The revised treatment standard has immediately benefited the situation as pH levels of the site have shown a marked improvement and will continue to do so as we continue to receive waste streams so treated. During last week’s visit by the DEA, officials commented favourably on the odour improvement in the treatment plant area.”

The Upper Highway Air NPO is holding a “Toxic Trek” in Hillcrest on Saturday, at which 1000 people have registered to march legally to demand accountability for the noxious odours in the area.

According to the Upper Highway Air Non-Profit Organisation (NPO), 11748 complaints were submitted to the relevant authorities in January 2017. The NPO was formed by residents to fight their case.