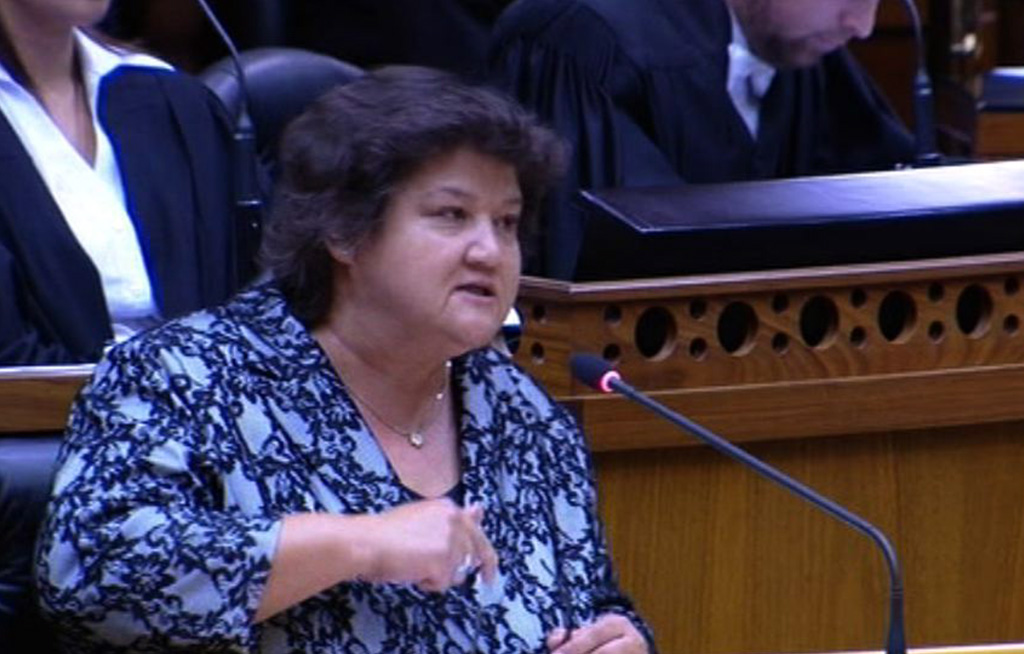 Minister of Public Enterprises Lynne Brown drives her point home during the second day of the 2015 SONA debate. She lauded Eskom for supplying electricity to the poor.

JOHANNESBURG – Public Enterprises Minister Lynne Brown on Tuesday intervened in the battle between Treasury and Eskom, ordering Eskom to hand over a report into a Gupta-owned coal company to Treasury today.

The power utility finally did so this evening.

Yesterday Treasury issued a statement saying Eskom had not co-operated with it in its probe.

But, Eskom hit back, urging Treasury to make public all their correspondence linked to the saga.

The issue came to the fore at a time heightened tension for the Treasury as Finance Minister Pravin Gordhan was last week summoned by the Hawks for a "warning statement" over the Sars covert investigations unit.

The Finance Ministry had been battling with Eskom over its alleged withholding of information about a coal company owned by the Gupta family.

Treasury said it&39;s been forced to wait three months for Eskom to respond to its report on the "problematic contracts" awarded to the Guptas&39;s Tegeta Exploration and Resources.

Treasury&39;s chief procurement officer Kenneth Brown said: "We wanted to get a sense of how much payments have been made to Tegeta on that core contract, because there was quite a bit of speculation as to some of these payments, that Eskom has been paying in advance.”

Brown claimed Eskom withheld the documentation that could show whether this was true or not.

The Public Enterprises Minister then ordered the power utility to hand that information over before the document was seen by Eskom&39;s board.

The power utility denied it was trying to frustrate the Treasury&39;s investigation, claiming it needed its board to approve the release of the information.

It also insisted its dealings with the Gupta family has been strictly above-board and said claims that CEO Brian Molefe was aligned with the family are "simply not true".

Eskom spokesperson Khulu Phasiwe said: "We are in the camp of government, because we are wholly owned by government… Mr Molefe is on record basically saying he has met the Guptas and that is where it ends. As far as the Guptas and their business relations with Eskom, they have followed all the requirements of people doing business with Eskom.”

It remains unclear if the Treasury&39;s Tegeta report would be made public, given reports that the coal company has threatened to interdict the ministry from releasing it.

Eskom has denied media reports that it&39;s been found to have bought R130-million is useless coal from Tegeta and Lynne Brown agrees.

“I don’t think the coal is poor-quality coal. In fact, poor-quality coal will harm the power plants and we know since this executive (Eskom) has taken over, we’ve actually had better electricity and power supply.”

She&39;s also said the Guptas are not her "dinner people".

"I don&39;t care who the people are. If they are people of interest… Treasury annually gives us a list of companies we shouldn&39;t do business with – and if there is any untoward activity on Tegeta mine, then we will act against the company."

Molefe was expected to present the power utility’s annual report and financial statements to Parliament on Wednesday.

He’s expected to face even more tough questions about why the parastatal is seemingly at war with Treasury.