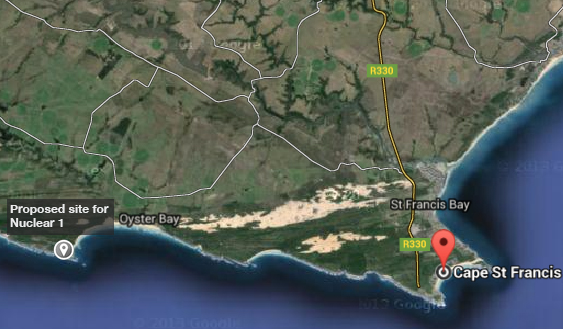 A Google map showing the proposed site for the Nuclear 1 development at Thyspunt, about 12km from Cape St Francis in the Eastern Cape.

JOHANNESBURG - Government says nuclear power in South Africa is going ahead. Earlier this week Energy Minister Tina Joematt-Peterson said that procurement deals would be signed with prospective partners by the end of 2015.

In the next ten years, government plans to introduce 9600MWs of nuclear energy.

The second version of the environmental impact assessment (EIA) for the site proposed for Nuclear 1, at Thyspunt in the Eastern Cape is not complete.

During a question and answer session in Parliament in March Minister of Public Enterprises Lynne Brown in a written reply said that Eskom had run out of money to complete the report.

“It was put on hold during 2013/14 due to funding constraints in Eskom.  In 2014, additional funds were approved and the finalisation of the Draft Environmental Impact Report (revision 2) was initiated,” noted the reply.

Eskom said this version of the report is due to be released to the public in May 2015 for comment but the Minister of Public Works says this has been put on hold due to the limited funding.

In the Nuclear Energy Policy of 2008,  Eskom was designated as owner operator for nuclear plants in South Africa. The Department of Energy says this means that Eskom is responsible for applying and obtaining various permits including EIA and nuclear licenses.

Eskom has already spent R35 million on the report, which was funded by the income generated from tariffs.

“Eskom, in terms of the electricity regulations, is allowed to budget for and spend money on activities that are deemed prudent for the development of generation project,” noted the power utility in a statement.

However, in 2014 Eskom had to reprioritise its expenditure, “The funding of the EIA was cut in favour of other projects and activities deemed more essential in nature

Costs for the EIA’s specialist studies are now being managed on an individual study and activity level. Still outstanding is the biodiversity offset study, public participation meetings and some still need to go through the independent phase review.

Eskom says this final stage is vital, “This phase of independent review is necessary to ensure that all issues raised have been addressed in an independent and transparent manner.”

The Department Energy says even though it’s not directly involved in the EIA process it is watching Eskom’s progress on the issue.

“The Department is engaging with Eskom to ensure logical conclusion of the critical activities for the programme. In addition, government is assessing the roles of the State Owned Entities in the energy sector to ensure optimal delivery of their mandates to address the socioeconomic needs of the country,” said the department to eNCA.com in a statement.

Others watching the process are the Thyspunt Alliance, a group opposing the development in the Eastern Cape.

Trudi Malan said they are working with their own experts to verify the findings of Eskom’s report, “The problem with the Eskom EIA is that their experts only spend three of four days on the site, when we actually need more information,” she said.

The first draft of the EIA was thrown out because incorrect methodology was used to do the assessment.

According to Malan the first report was a sham, “The first EIA was so badly done that they had to go back to drawing board,” she said.

“To get wind direction wrong, is to me pretty shocking and they completely left out the impact on the squid industry in spite of the fact that we alerted them,” said Malan.

Modise assures that changes will be made, “The environmental assessment practitioner indicated that they would revise the assessment methodology and present it to the Department, prior to the finalisation of the final report in order to address the comments made by the Department,” he said.

Thyspunt Alliance have already forked out R60,000 on their own comissioned reports and legal fees. They have also received a lot of reports as donations in kind from scientists and anthropologists who have been working in the area for many years.

“It’s inevitable that we’re going to sit with a town that will collapse after the construction has finished,” said Malan.

Watch this video about the pros and cons of nuclear energy: