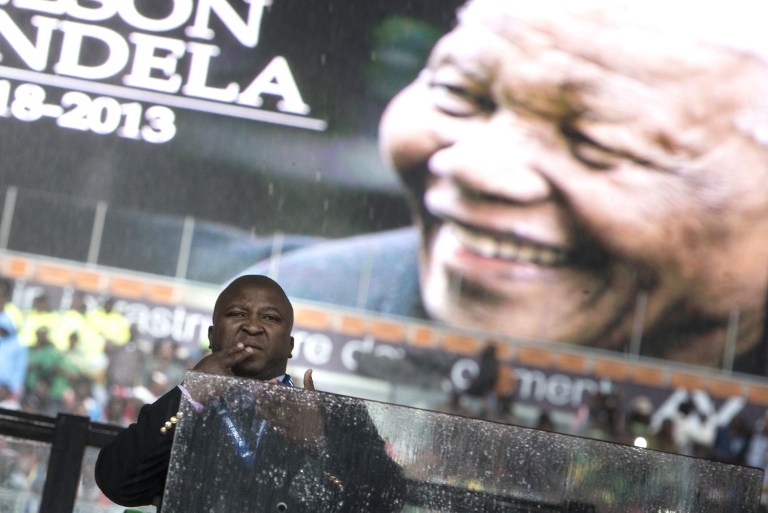 Sign language interpreter, Thami Jantjie, who has been labeled a "fake", gestures during US President Barack Obama's speech at Nelson Mandela's memorial service, at the FNB Stadium on December 10, 2013 in Johannesburg.

JOHANNESBURG - A month after Mandela memorial sign language translator Thamsanqa Jantjie was revealed to be fake, government still can’t, or won’t, confirm that he was declared mentally unfit to stand trial for two brutal necklacing murders.

eNCA reporter, Karyn Maughan investigated those killings, and spoke to some of Jantjie’s co-accused...

On May 28, 2003 in Braamfischerville, Mozambiquan Jaime Domingos Marie and his unknown companion were stripped naked, beaten and sexually assaulted with sticks by an angry community.

They were accused of stealing a hot plate, a pair of shoes and three eggs.

According to a witness, Jantjie provided a tyre, oil and a lighter to set the victims alight in the so called "necklacing" manner.

Jantjie was arrested along with 25 others for the Braamfischerville necklacing murders.

Only two men were convicted -- one of whom insists he did not participate in the attack, even though he was present.

The case’s investigating officer and Jantjie’s co-accused insist he was never tried for murder because he was found mentally unfit.

But the National Prosecuting Authority was unable to confirm this, and referred eNCA to the justice department.

The justice department, however, says only the prosecution service can confirm that information.

* Watch Karyn&39;s video feature above, in which she reflects the run-around given by every official department linked with Jantjie. This serves to highlight the fact there’s still no official word on the mental state of the man who was within arm’s length of some of the world’s most powerful leaders.