Explainer: behind the scourge of rape in South Africa 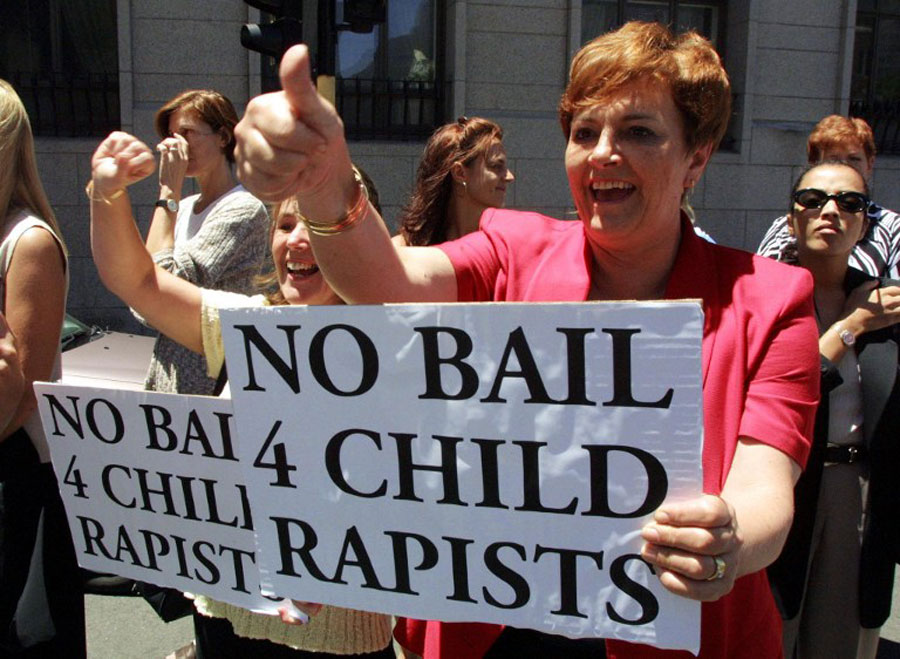 About 150 people protest in Cape Town 12 December 2001 against child abuse. There have been a spate of baby rapes in the country in recent weeks, including the rape of a nine month-old baby by six men.

On July 1, a man linked to an obscure online cyber meeting space for alleged paedophiles with fetishes for the sexual abuse of babies in nappies will appear in a magistrate’s court in the Western Cape.

The man is one of five people who were arrested in three different provinces earlier this year in a joint swoop by South African and Belgian police.

Although explanations by paedophiles in South Africa about their actions are not well documented, our research found that the reasons behind child sexual abuse is much more complicated and are partly dominated by a dance of denials, replete with contradiction.

The ring follows recent reports in the UK that suggest that sexual abuse against children is on the rise. In June, a UK based newspaper reported a six-month-old child had been sexually abused.

Incidence of baby rape is not new. When a nine-month-old baby was raped in South Africa in 2001, a myth had emerged showing that sex with a baby was a means of curing HIV/Aids.

What became known as the “virgin myth” was among several speculations about what would account for high incidence of infant rape. Other justifications have used patriarchy and poverty.

To date, not enough research has been completed to clarify or test the various theories that abound.

Our study explored one element of the problem: how perpetrators make sense of sexual acts with young children in South Africa.

Interviews were completed with 27 incarcerated sex offenders in eight South African prisons, who were between 16 and 86-years-old. All have been convicted for sexual abuse of children who are six or younger.

The perpetrators in the study did not use the virgin cleansing myth as an explanation for sexual abuse of young children. Instead, the common denominator in the narrative included childhood adversities and socio-cultural factors such as patriarchal notions of manhood, and particularly the perpetrators’ beliefs about sexual entitlement.

Our study confirmed earlier research that revealed belief in sexual entitlement which chronicled one incident where a father raped his daughter because his wife was away from home. The earlier study had found that the demand for instant gratification was an important factor in many rape cases.

Of the 27 perpetrators interviewed, 13 spoke about the power of women getting men successfully convicted for rape through false allegations. Five men raised issues directly expressing frustrations about feeling disempowered by women’s rights.

Although there were assertions that sexual gratification motivated the abuse, the findings suggest that perpetrators were mostly motivated by the need for the acquisition of power to target young vulnerable children for sex.

Children as young as two were groomed in the minds of the perpetrators, practically considered to be adults, and often blamed for their own abuse because they were allegedly “seductive”. On the other hand, their vulnerability and gender often positioned them as powerless objects to be abused in the eyes of perpetrators.

One of the offenders said as a result of childhood sexual abuse, physical abuse and neglect, abject poverty and an absent father, he never had an opportunity to learn about manhood. This contributed to his struggles in establishing and maintaining intimate relationships with peers.

He also developed violent arousals which he said were difficult to control but felt more comfortable with young children. He ended up sexually abusing a six-year-old girl in his neighbourhood. He was 19-years-old at the time and is currently serving a 20-year sentence.

The state of rape in South Africa

South Africa has been alleged to be the rape capital of the world. Between 2005 and 2006, there were 54,926 reported rapes of women and girls – four times the reported number of rapes for the US. Crime statistics released in 2014 reflects that reports of these crimes have dropped to 46 253. Although how data on rape was recorded has changed between 2005 and 2014.

It is likely that this is an under-report. Not only are women less likely to report their rape because of associated stigma, young children may not even know who to go to or whether they will be believed even if they do.

In a randomly selected study of 1686 males in the Eastern Cape and Kwa-Zulu Natal areas, a 2010 report stated that 5% had raped a child under 15 years and that 27% had raped a woman.

A new approach to child protection

The stories from the perpetrators show that child protection remains a huge challenge for South Africa.

There should be continuous engagement at all levels on this social problem which continues to affect many children. More often they are disempowered by age, gender, race, socioeconomic standing and the system to prevent or act against the abuse.

This article is based on research conducted by Kgauhelo Lekalakala for her PhD through the Open University. The author co-supervised the research.

Sandy Fraser is Associate Dean, Faculty of Health and Social Care at The Open University.