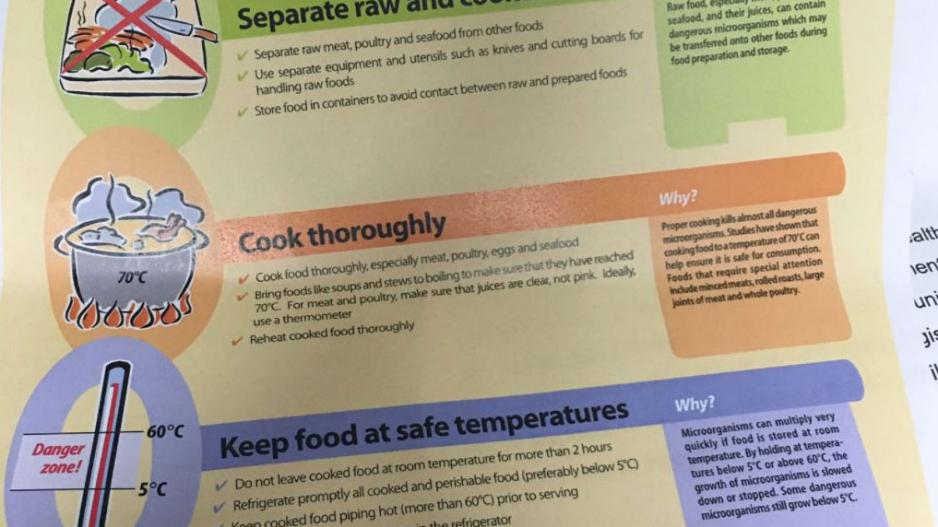 Some information about how to prevent contracting Listeriosis, as provided by health officials during a news briefing on an outbreak of the disease on 5 December 2017.

Listeria is an organism that contaminates food and can result in pregnant women going into premature labour or even losing their babies. The Conversation Africa’s Health and Medicine Editor, Candice Bailey, spoke to Kerrigan McCarthy from the National Institute of Communicable Diseases about listeriosis and why it needs attention.

What is listeriosis and why is it dangerous?

Listeriosis is a serious bacterial infection caused by the rod-shaped bacteria listeria monocytogenes. The bacterium is spread when people eat food contaminated with the bacterium. The most common foods to be contaminated are raw or unpasteurised milk as well as soft cheeses, or vegetables, processed foods and ready-to-eat meats and smoked fish products.

Infection with listeria bacteria results in mild to severe gastroenteritis. In people with weak immune systems it can lead to meningitis or septicaemia. And in pregnant women, listeriosis can result in a miscarriage or stillbirth, premature delivery, or meningitis in the newborn – leading to with permanent disability.

Listeria bacteria are found in the environment – for example in water and in the soil. This means that animals and vegetables can become contaminated at any time and that, as a result, anyone can get listeriosis. But there are certain groups that are at higher risk of severe disease: these include newborns, the elderly, pregnant women and their unborn babies; and those with underlying conditions such as HIV, diabetes, cancer, chronic liver or kidney disease.

Pregnant women are particularly prone because pregnancy causes a natural reduction in the strength of the immune system.

Why are the numbers rising?

In South Africa, the first documented outbreaks of listeriosis were in 1977. Between August 1977 to April 1978, 14 cases were reported in the Johannesburg area.

Since then, sporadic cases have occurred throughout the country. For example, between January 2015 and September 2015 seven cases were reported at a tertiary hospital in the Western Cape Province.

Over the last few months the National Institute for Communicable Diseases has received reports of a marked increase in the number of cases across the country, but particularly in the Gauteng Province, South Africa’s smallest but most densely populated province.

There have been 557 confirmed cases across the country this year. In Gauteng, the population incidence rates have increased from two per million to eight per million. The highest incidence has been recorded in the City of Johannesburg at 12 cases per million. This is not as high as the number of people who get meningococcal meningitis or pulmonary tuberculosis, but the consequences are just as serious.

Of the 345 cases in Gauteng, over 60% are newborn babies that have been infected.

The institute is trying to establish what the source of the infection is so that measures can be put in place to prevent further cases. Mothers who have been infected with the bacteria are being interviewed and the institute is also engaging with the food service quality industry.

What are the signs and symptoms?

Listeria can survive in fridge temperatures of 4°C. The infection incubates for between three and 70 days. In healthy adults, symptoms are usually mild and may include fever and sometimes nausea or diarrhoea.

In high-risk patients, the spread of the infection to the nervous system can cause meningitis leading to headaches and confusion, a stiff neck and convulsions. Bacteraemia – when the bacteria is found in the blood – may also occur.

Gastroenteritis due to listeria does not require treatment. But meningitis or septicaemia as a result of listeria can be life-threatening and should be treated with intravenous antibiotics.

What are the challenges in dealing with listeriosis?

Firstly, the incubation period of 70 days makes it difficult to track what the patient ate and therefore to identify the contaminated food.

And secondly, once the food source is narrowed down, tests need to be conducted on the range of possible foods to establish which is the implicated one. Only once authorities are able to identify the source are they able implement measures to prevent further cases.

How can we protect ourselves from this infection?

There is no vaccine or pre-exposure prophylaxis that can prevent infection. The main preventive measure is good basic hygiene, and proper, safe food preparation and storage.

Unlike most other food-borne pathogens, Listeria monocytogenes can grow in refrigerated foods that are contaminated. To prevent this, fridge temperatures should be set below 4?C; and freezer temperatures below -18?C.

Those at high risk of listeriosis should avoid:

Additional measures include thoroughly cooking raw foods from animal sources, such as beef, pork or poultry. Raw fruit and vegetables should be thoroughly washed before eating. And surfaces where food is prepared should be decontaminated regularly, particularly after preparing raw meat, poultry and eggs, including industrial kitchens.

This story has been updated to reflect the latest statistics relating to listeria.