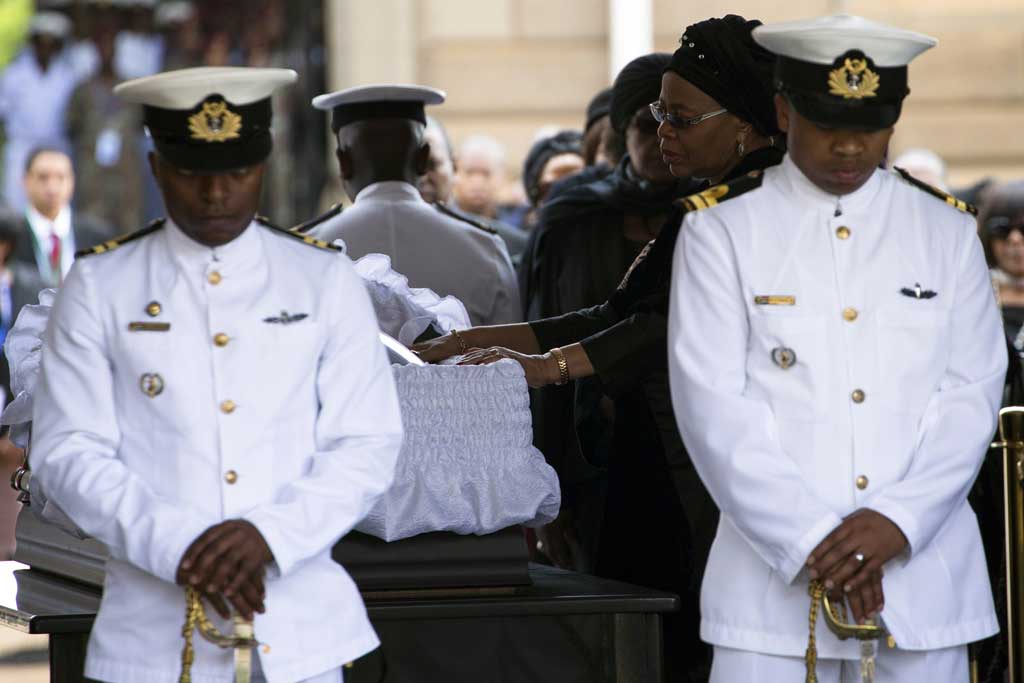 Graca Machel, the widow of former South African President Nelson Mandela, views his coffin as he lies in state at the Union Buildings in Pretoria December 11, 2013.

PRETORIA - Nelson Mandela&39;s family, local politicians and foreign leaders were the first to view his open casket at the Union Buildings on Wednesday, bidding a solemn, sometimes tearful farewell.

Her head bowed, his widow Graca Machel walked a few steps behind President Jacob Zuma after pausing at her husband&39;s coffin, resting on a platform in the amphitheatre outside the seat of government.

She was followed by his ex-wife Winnie Madikizela-Mandela and her daughters, before former presidents Thabo Mbeki and FW de Klerk paid their respects.

De Klerk&39;s wife Elita dabbed away tears, as did Mandela&39;s personal assistant of 18 years, Zelda la Grange, who clutched the hand of U2 singer Bono as she made her way to the casket.

At a memorial in Soweto on Tuesday, Zuma had announced that the amphitheatre would be named after Mandela, who was inaugurated there as South Africa&39;s first black president nearly 20 years ago.

It was at the Union Buildings on that day that Mandela set out his vision of a racially-integrated "rainbow nation". On Wednesday, his funeral cortege passed several landmark sites that spoke of key moments in his political journey.

The hearse, led by motorcycle outriders, was taken past Pretoria Central Prison, where Mandela was held in 1962 for incitement and leaving South Africa illegally.

It also passed the High Court in Pretoria, where Mandela stood trial for treason and sabotage and made his now legendary pledge, in April 1964, that he was prepared to die for the ideal of a non-racial society.

This statement was quoted on Tuesday by US President Barack Obama in his moving 20-minute eulogy at Mandela&39;s official memorial, hailing the former president as a "giant of history".

His decision to shake the hand of Cuban President Raul Castro in a reconciliatory gesture that belies decades of hostility between Havana and Washington created a diplomatic stir.

Mandela will lie in state for three days, and the procession will be repeated each morning as the military brings his coffin from 1 Military Hospital to the Union Buildings.

Members of the public lined the streets of the capital to watch the procession after it left the hospital at 7.15am on Wednesday morning, and were waiting on the Union Buildings lawn by midday for the viewing area to open to the public once dignitaries had paid their respects.

Downtown, hundreds of people burst into song and dance as the cortege passed by, chanting "Tata Mandela".

Johannes Segooa, who watched from behind a security barrier, said he came to bid farewell to a man to whom South Africans owed much.

"His legacy will last forever as Tata has sacrificed a lot for us," said Segooa.

"He has run his race until the finish line."

On Madiba Street, a small group of people formed a guard of honour as helicopters hovered overhead.

Some pedestrians paused before hurrying to work. Others briefly left their office buildings for a glance at the cortege.

Said Olga Mathole from Soshanguve: "We know this is for Mandela, but our employers aren&39;t aware, so I must go to work."

Mandela died at his home in Houghton, Johannesburg, on Thursday at the age of 95. Earlier this year, he spent several weeks in the Medi-Clinic Heart Hospital in Pretoria while well-wishers kept up a constant vigil outside the gates.

He will be buried in his boyhood village of Qunu, in the Eastern Cape, on Sunday