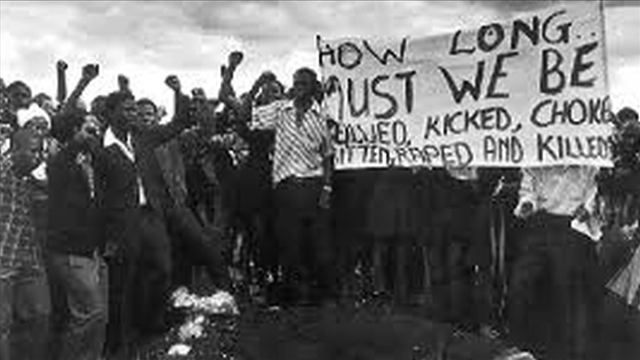 JOHANNESBURG – The Fees Must Fall has become the biggest student protest movement in democratic South Africa.

The protest has drawn comparisons with the 1976 youth uprisings in Soweto against the apartheid education system.

Black youths fought against policies that would force them to learn in Afrikaans, and more than a 100 people were killed by police.

The late journalist Sophia Tema reported on the 1976 uprisings. Tema watched a wounded Hector Pieterson, shot by authorities, as he died in her car.

“To me it was saddening to see our children fighting for our freedom, when we as elders were standing back. Elders were standing on and looking. At that time, I didn’t feel sad. I was saying to myself it is high time that we do something about the situation in this country. But the following day, it hit me hard that it had to be done by children,” Tema said.

Nearly 40 years after the Soweto Uprisings, a generation of so-called “born frees” are again fighting for access to education.

Some of those arrested are the children of anti-apartheid activists who had fought for democracy – and were beaten, arrested and jailed for doing so.

Reverend Frank Chikane’s son, Kgotsi, was one of the students arrested during the Fees Must Fall protests at Parliament.

Chikane said: “I remembered when my son got arrested, that I learnt from my mother, that it had to be somebody’s child. The worry is the risk of injury, you know. But otherwise, they have made a choice for a principle.”

The police have defended their response to the Fees Must Fall protests, which was defined by the use of stun grenades, tear gas and arrests.

But the protests have largely been non-violent, with no lives lost during the demonstrations.

Thousands of students marched this week to the ANC’s headquarters, Luthuli House, without incident and the vast majority have distanced themselves from acts of violence and vandalism.

For these students, FeesMustFall is about achieving the real social and economic change that their counterparts in 1976 had fought for and died.

Wits SRC leader Nompendulo Mkhatshwa said: “The revolution is coming. Rhodes fell, Stellenbosch is being opened, Wits is being decolonised. There are many movements happening in the country, at universities right now. The youth is ready to speak.”