POLLS: ANC slightly ahead in Tshwane 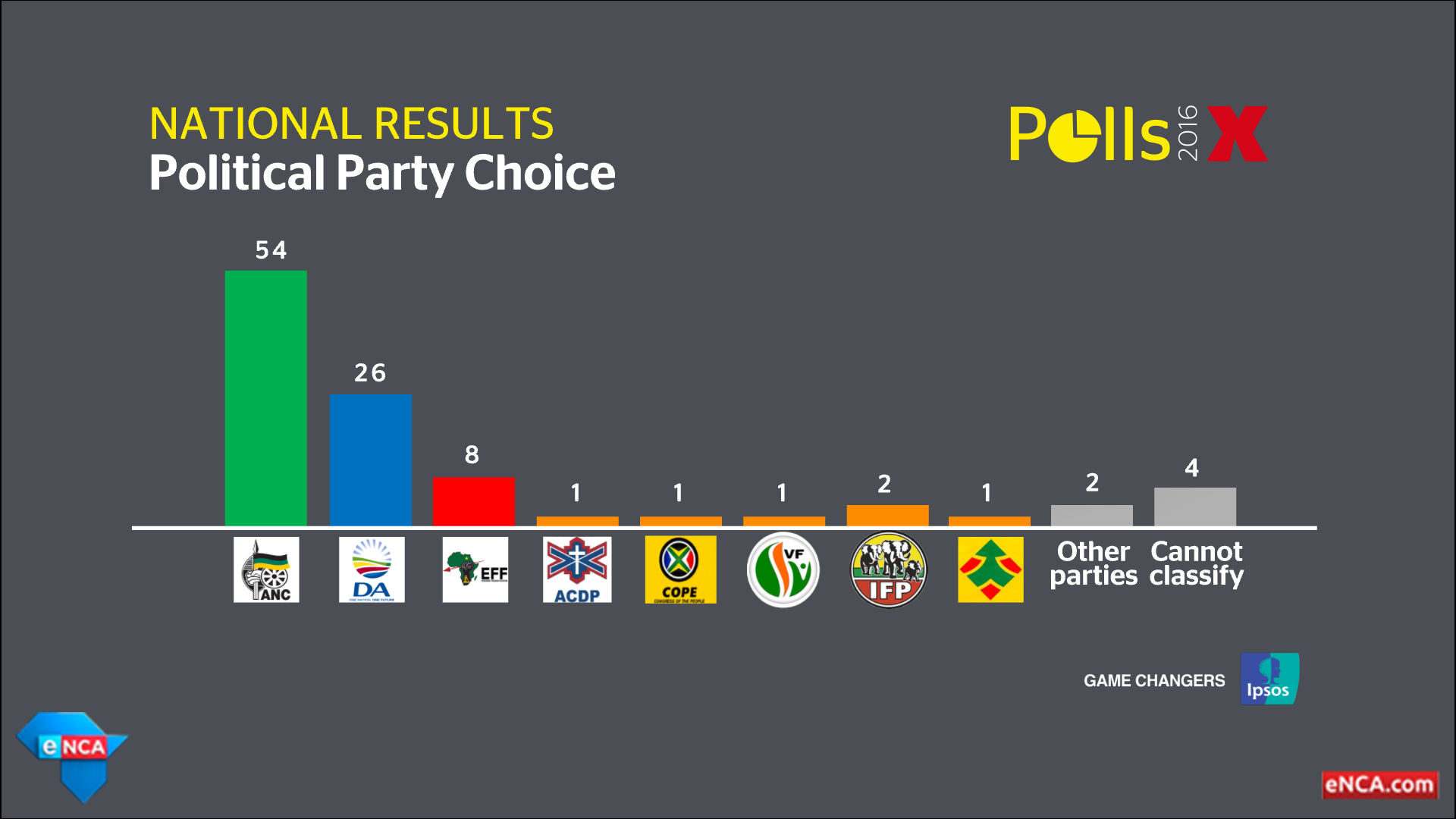 The national results showing support for political parties ahead of the 3 August municipal election. These results are from eNCA's final election poll released on 1 August 2016.

JOHANNESBURG – In a massive turnaround, the ANC is back on track in Tshwane, neck-and-neck with the Democratic Alliance (DA) in the capital, according to the final comprehensive eNCA Ipsos poll.

Since the ANC is particularly strong in rural areas and the DA stronger in the cities, this supports the eNCA polls which showed the ANC unlikely to manage  a majority in any of the three major contested cities in this week’s local government elections.

EDITOR’S NOTE: For the full methodology read the note at the end of this story.

In Tshwane, the ANC polled at 47 percent, four percentage points ahead of the DA, which got 43 percent.

Over the past eight weeks, the ANC has battled to dominate the polls in the capital, following violent protests over the party&39;s mayoral candidate, Thoko Didiza.

READ: Look back at the Tshwane poll results here

The Economic Freedom Fighters (EFF) polled at 9 percent, and only 1 percent of respondents said they would vote for other parties.

The African Christian Democratic Party (ACDP) and the Freedom Front Plus (FF0+) will deliver their best metropolitan performance Tshwane.

The margin of error for Nelson Mandela Bay results is between 1.6 and 5.6 percent.

The governing party is also running neck-and-neck with the official opposition in the City of Johannesburg.

ANC support now sits at 46 percent, while the DA is at 41 percent.

With the EFF polling eight percent and with other parties making up 5 percent there are likely to kingmakers in Johannesburg.

READ: Look back at the Johannesburg poll results

As far as the smaller parties are concerned, the Inkatha Freedom Party (IFP) will be the “biggest of the small parties” in Johannesburg.

The margin of error for Johannesburg results is between 1.2 and 5.2 percent.

In Nelson Mandela Bay, the DA holds a commanding lead of 10 percentage points.

The United Democratic Movement (UDM) will be the fourth biggest party in Nelson Mandela Bay.

The margin of error for Nelson Mandela Bay results is between 2.1 and 8.3 percent.

According to Mari Harris, managing executive of business development and public affairs at Ipsos, the following results have been gathered for the rest of the country:

“Looking at the survey results from Pulse of the People™ in the other metropolitan areas in the country it is clear that the ANC will take strong victories in Buffalo City and in Mangaung.

“The race in Ekurhuleni is much closer and it makes this metro also too close to call, although the ANC seems to be in the lead.

“The ANC should also win in eThekwini. However, in this area the unhappiness with some of the chosen candidates for ward councillor has made the survey results difficult to interpret clearly.

“The DA will take an outright victory in the City of Cape Town and also in the Western Cape (if one looks at provincial results).

“In all the other provinces the ANC will be on top, although the EFF will be delivering a strong performance in Limpopo – the party could win about a quarter of the votes in this province.

“However, in terms of the survey results it seems evident that a large number of local councils will be in need of coalition-forming after this election.  Although a few councils are currently controlled by coalitions, this will be, for the most part, a new experience for South Africans,” said Harris.

Findings are from two series of studies:  the pre-election polls conducted for the eNCA and the findings of Pulse of the People™ studies.

This project has been undertaken in the eight weeks before the local government elections. Some 3,000 voters were recruited using RDD (Random Digit Dialling), representative of eligible voters in Johannesburg, Tshwane and Nelson Mandela Bay.  Each week at least 1,500 of them were phoned for a five-minute interview.  All interviews were conducted using CATI (Computer Assisted Telephone Interviews) with a representative sample of residents of the three metropolitan areas who have access to a cellphone.

Interviews were conducted on the Monday and Tuesday of each week, data was processed on the Wednesday and results were published on the Thursday.  The purpose of these studies was to measure the “political climate” in the country during the pre-election period, measure the influence of campaigning and things that happened during this period (like the unrest and violence in Tshwane) and contribute to the political discourse in the country.

Pulse of the People:

This study is undertaken by  Ipsos every six months, however, in election years a third round is often added (this happened this year).  A total of 3,861 interviews were conducted from 17 June to 18 July with a representative sample of South Africans.  The margin of error for this sample size is between 0.7 percent  and 1.6 percent.

Results are then filtered by those 18 years and older and whether the respondent is registered to vote. This resulted in a total of 3,142 respondents, with the margin of error confirmed at 0.8 percent to 1.7 percent (for this sample as a whole).

Some of the questions in the Pulse of the People™ study have been asked since 1976 and questions about the opinions on political leaders and parties have been included 1990.

This study is done through face-to-face interviews using CAPI (Computer Assisted Personal Interviews) in the homes and the home languages of respondents. A process of stratified random sampling is used to determine the choice of respondent and interviewers do not have any influence on this process.