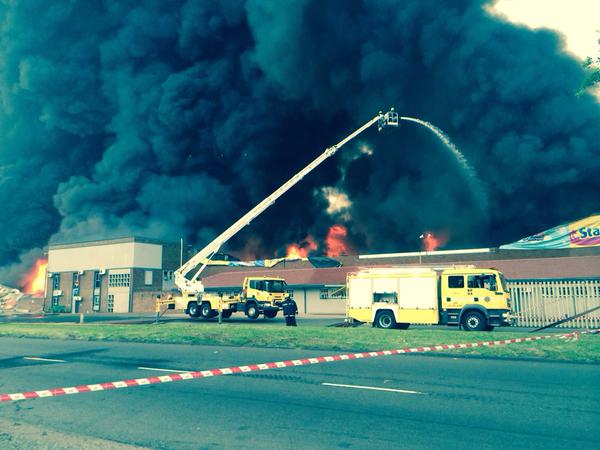 The Sunflower oil factory on South Coast Road is on fire at the moment. Fire department on the scene.

The blaze has reportedly now also jumped to the Plascon paint building next door.

The blaze started in a warehouse next to the oil factory around 05:00am CAT on Thursday morning. Up to fifty workers were reportedly on site when the fire broke out, however no injuries have been reported.

At least ten fire trucks are on the scene, and firefighters are battling to contain the blaze which has created massive plumes of smoke in the area.

Emergency services have asked motorists and spectators to steer clear of the area as response operations continue.  South Coast road is closed at this vicinity.

Metro rail in Durban has suspended operations between Umlazi and Durban due to the fire -- Sunoil and Plascon are both alongside the railway.

The cause of the blaze is unclear at this stage.

* This is a developing story. eNCA.com will publish further information as it becomes available.

@expressoshow massive fire in durban on south coast road and Mobeni warn viewers about the roads being closed. pic.twitter.com/LxaMugLqML