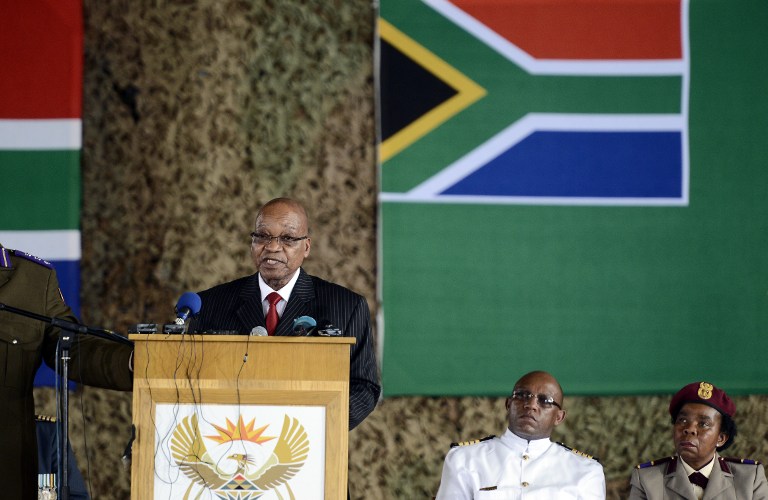 File: On 23 March 2013, South African President Jacob Zuma (L) gives a speech during a memorial service for the South African soldiers who died during a battle with rebels in the Central African Republic

Pretoria - Chancellor of the National Orders Dr Cassius Lubisi has announced the names of those people who will be bestowed with the country&39;s highest awards, at this year’s presidential honours. Herewith, the full list of receipients:

The Order of Mendi for Bravery recognises South African citizens who have performed acts of bravery.
The Order in Gold will be bestowed on: Cletus Mzimela: For his precision under pressure, and gallantry in the face of crippling odds in pursuit in the liberation of the people of South Africa.

The Order of Ikhamanga recognises South African citizens who have excelled in the fields of arts, culture, literature, music, journalism and sport.
The Order in Silver will be bestowed on: Chad Le Clos: For his excellent achievements on the international swimming stage, especially at the London Olympics in 2012, thus placing South Africa in high standing globally in the field of Aquatic sports; Ilse Hayes : For her courageous and relentless pursuit of excellence and incredible physical endurance; Vusi Mahlasela: For using his talent beyond its entertainment value to draw attention to the injustices that isolated South Africa from the global community during the apartheid years; Zolani Mkiva: For achieving international recognition in praise poetry and being an outstanding champion of African oral traditions who has done not only South Africa proud, but the continent as a whole; Kaizer Motaung: For his achievements as a committed and dedicated footballer and his outstanding contribution to the development of young football talent in the country; Pretty Yende: For her excellent achievement and international acclaim in the field of world opera and serving as a role model to aspiring young musicians.

The Order of the Baobab recognises South African citizens who have contributed to community service, business and economy, science, medicine and technological innovation.
The Order in Silver will be bestowed on: Yusuf Abramjee: For his excellent contribution to the field of community development through LeadSA; David Jacobus Bosch (Posthumous): For his selfless struggle for equality in segregated churches and society in general and his dedication to community upliftment. By doing so, he lived the values of non-racialism against the mainstream of his own culture; Colin Wells Eglin: For serving the country with excellence and for his dedication and courage in standing up for the principles of equality for all South Africans against the unjust laws of the past; Herbert William Garnet De La Hunt: For his tireless and excellent work in the service of promoting the South African Scouts movement locally and abroad and demonstrating the spirit of volunteerism; Sayed Mohamed Ridwan Mia: For his excellent contribution to the field of medicine and giving hope to victims devastated by burn injuries.

The Order of Luthuli recognises South African citizens who have contributed to the struggle for democracy, nation-building, building democracy and human rights, justice and peace as well as for the resolution of conflict.
The Order in Gold will be bestowed on: ?Nkosazana Dlamini Zuma: For her exceptional life&39;s work to the cause of freedom for the people of South Africa and the development and consolidation of our democracy in the quest to create a better life for all.

The Order in Bronze will be bestowed on: Nomazizi Mtshotshisa (Posthumous) For being the embodiment of courageous leadership by women in South Africa, and for her outstanding contribution to the struggle for democracy;

The Order of Mapungubwe recognises South Africans who have accomplished excellence and exceptional achievement to the benefit of South Africa and beyond.
The Order in Bronze will be bestowed on: Prof. Quarraisha Abdool Karim: For her outstanding work in the field of HIV, AIDS and tuberculosis (TB) research; and her role in health policy development that is placing South Africa on the international stage.

The Order in Silver will be bestowed on: Dr Bernie Fanaroff: For his excellent contribution to astronomy and dedication in putting South Africa on the map with the SKA Project. He is a thinker, an academic, a trade unionist and an exceptional public servant; Professor George Ekama: For his excellent research that has provided innovative solutions to enhancing and improving wastewater treatment. His important work is helping the country to find solutions to water scarcity; Dr Glenda Gray: For her excellent life-saving research in mother-to-child transmission of HIV and AIDS that has changed the lives of people in South Africa and abroad. Her work has not only saved lives of many children, but also improved the quality of life for many others with HIV and AIDS; Prof. Malegapuru William Makgoba: For his dedication and excellent contribution to the field of science and medicine, locally and internationally; and for his contribution to the building of democracy in South Africa. He is an outstanding academic and a pioneer of transformation in higher education;

The Order of the Companions of OR Tambo recognises eminent foreign nationals and other foreign dignitaries for friendship shown to South Africa. It is therefore an order of peace, cooperation and active expression of solidarity and support.
The Order in Silver will be bestowed on: Dina Forti: For developing a strong anti-apartheid movement in Italy and assisting liberation organisations in Southern Africa, including the ANC, Frelimo and the People&39;s Movement for the Liberation of Angola (MPLA); Reverend Jesse Louis Jackson: For dedicating his life to challenge societies and governments to recognise that all people are born equal, and that everyone is in equal measure entitled to life, liberty, prosperity and human rights. For his excellent contribution to the fight against apartheid; Enuga Screenivasulu Reddy: For his active support of the South African freedom movement for more than half a century. As head of the United Nations (UN) Centre Against Apartheid for over two decades, he played a key role in promoting international sanctions against South Africa and organising the world campaign to free Nelson Mandela and other political prisoners; Giuseppe Soncini (Posthumous): For his contribution to the liberation movement by forging a Pact of Solidarity between the town of Reggio Emilia in Italy and the ANC. His town served as a haven to many anti-apartheid activists during the difficult times of oppression.

The Order in Gold will be bestowed on: Linden Forbes Sampson Burnham (Posthumous): For his dedication to the liberation of his country, Guyana, as well as the African continent. He established diplomatic relations with many African countries and expressed solidarity with the liberation movement and freedom fighters in South Africa.