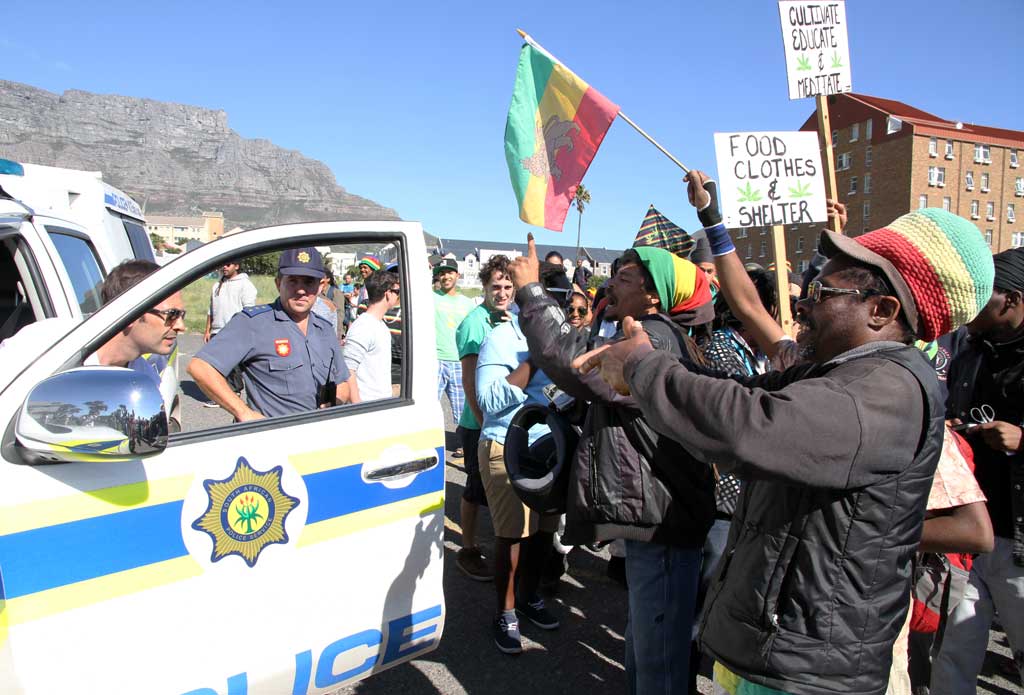 Members of the Rastafarian community attempt to convince police and Canna Fest organiser Werner Weber to allow them to smoke during the Global Cannabis March held in Cape Town on May 4.

Despite almost facing a non-event due to a missing permit, an unruly Rastafarian faction and getting no signatures for their petition, organisers of the Global Cannabis March in Cape Town seemed happy.

The march formed part of the Canna Fest and saw a procession of about 500 weed enthusiasts and activists march through a section of Cape Town to “celebrate global unity and support for the Cannabis plant’s re-integration into our society”.

“It’s all about the support for the cause, and if you look around it is certainly here,” Dagga Party president and festival organiser Jeremy Acton (48) told eNCA.com after the rally.

Acton and his team had faced a stressful night leading up to the event.

“We were told last night at about 9:30pm that the city had not emailed us the permit,” said Acton.

However after a few calls to disaster management and “heads of permits for events” the march was back on.

“Police were informed telephonically last night and this morning that we would be permitted to march,” said Acton.

Acton says, however, the city denied them their planned route three times and intentionally gave them a shorter route so the march would not reach as many people.

“We applied for a certain route which all the other causes get including Aids and the gay rights activists. What they did was squash us into the corner of the city where we couldn’t reach people,” Acton said.

Acton, who is a farmer by trade, admitted that he failed to get any signatures for his petition to have the Dagga Party registered officially, saying it was difficult to find members of the crowd and greater cannabis culture that are registered voters.

“You would be lucky to find out if two percent of the people here are registered voters,” Acton said.

Despite a distinct plume of smoke hanging over much of the procession, police made no arrests on the day. However, they claim they confiscated numerous marijuana affiliated paraphernalia.

“They (people smoking weed) just got lucky I suppose as all things go,” Warrant Officer de Villiers from the public order police explained. “I took a pipe away from one girl, but I would say I saw no-one smoking.” Officer De Villiers chose not to give his first name.

Although not a member of Police and Prisons Civil Rights Union (POPCRU), De Villiers did admit he knew of their alleged support for the legalisation of marijuana, but said his opinion mattered very little in this regard as his job is “to uphold the law no matter what”.

The crowds were requested to disperse after the march and were encouraged to attend the other events included in the fest, for which they would need to pay. This caused some contention with members of the Rastafarian community who expressed their concern regarding the commercialisation of the Canna Fest and initially refused to disperse.