GALLERY: The aftermath of a flash flood 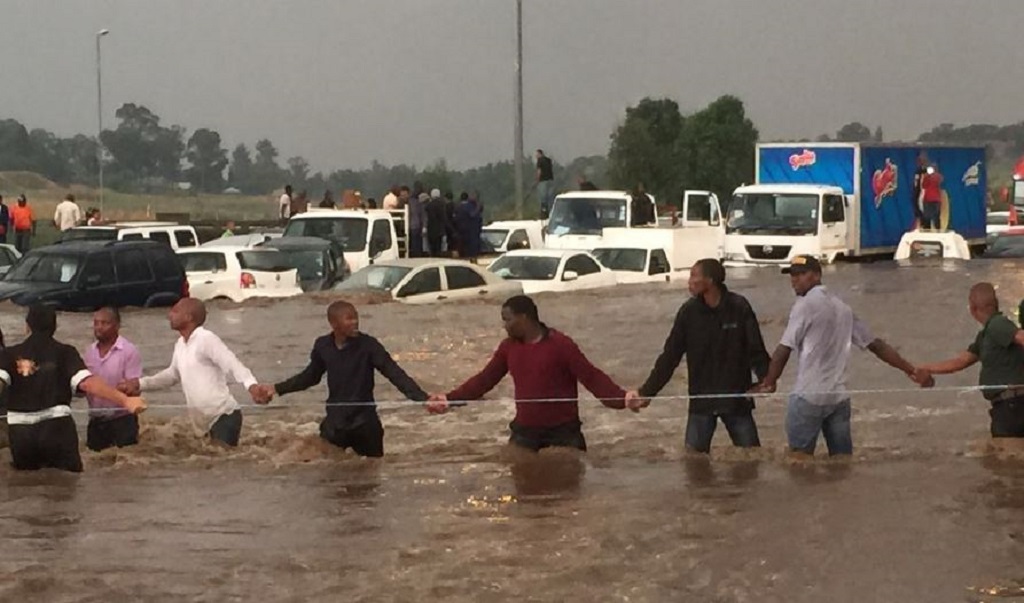 Photos showing the Spirit of Ubuntu during flooding.

JOHANNESBURG – An Alexandra resident, Aubrey Mashao said on Thursday he watched hopelessly as a raging Jukskei River swept his shack away in one of the worst storms to hit Johannesburg in recent memory on Wednesday.

Mashao said he arrived from work on Wednesday during the downpour in Stjwetla, Alexandra.

“It was raining so hard that I was wet from just walking a few metres to my shack. I realised that the river was overflowing when I saw a few people running from their shacks to the pathway… I saw my shack shaking, surrounded by lots of moving water. My house was gone within a split second as I stood there,” said Mashao, after spending the morning trying to find his belongings.

He remembers seeing his fridge tumbling away with the river.

“My bed and other belongings were gone too. When I walked closer, my fridge was the last item to be swept away. I just watched, there was nothing I could do.”

Just arrived at #Alexandra confronted by the aftermath of the heavy rains and flood from yesterday. pic.twitter.com/2DuYwzaOy2

He said the storm was the worst to hit Stjwetla since his arrival in the area in 2007, when he moved from Ga-Rankuwa in Pretoria.

A relative accommodated him overnight.

Nearby, an elderly woman had salvaged her family’s belongings and was busy washing off the muddy clothes on the river bank. She had settled in Stjwetla eight years ago and had experienced a storm before.

“It is the second time for me and my family, but the last time was not this worse (sic). This is the worst storm for Stjwetla,” she said.

Just an attempt to show you the overall damage of yesterday's #floods here at #Alexandra pic.twitter.com/O6hz1SCpcF

Meanwhile, police continued the search for a three-year-old girl, Everite Chauke, whose father had carried her and climbed up a tree on Thursday to escape the raging floodwaters. But the branch broke and the little girl slipped away into the river.

Her distraught parents were accommodated at the nearby Gift of The Givers centre as rescue services continued the search.

Amid forecasts of more heavy rain on Thursday, the Johannesburg Road Agency (JRA) called on road users to exercise care and patience when travelling.

A number of bridges have been reported flooded or collapsed as a result of yesterday`s heavy rain.

The JRA said the flood was "an act of God" and that they expected such severe downpours only once every five years.

JRA spokesperson Bertha Peters-Scheepers said: "JRA is out assessing the damage to infrastructure, clearing debris, silt and other obstructions to our roads, bridges and stormwater drainage systems."

The managing director of the JRA, Dr Sean Phillips said the agency had inspected recurring blockages in the areas which are termed "flooding hotspots" that that they were monitoring low-level bridges.