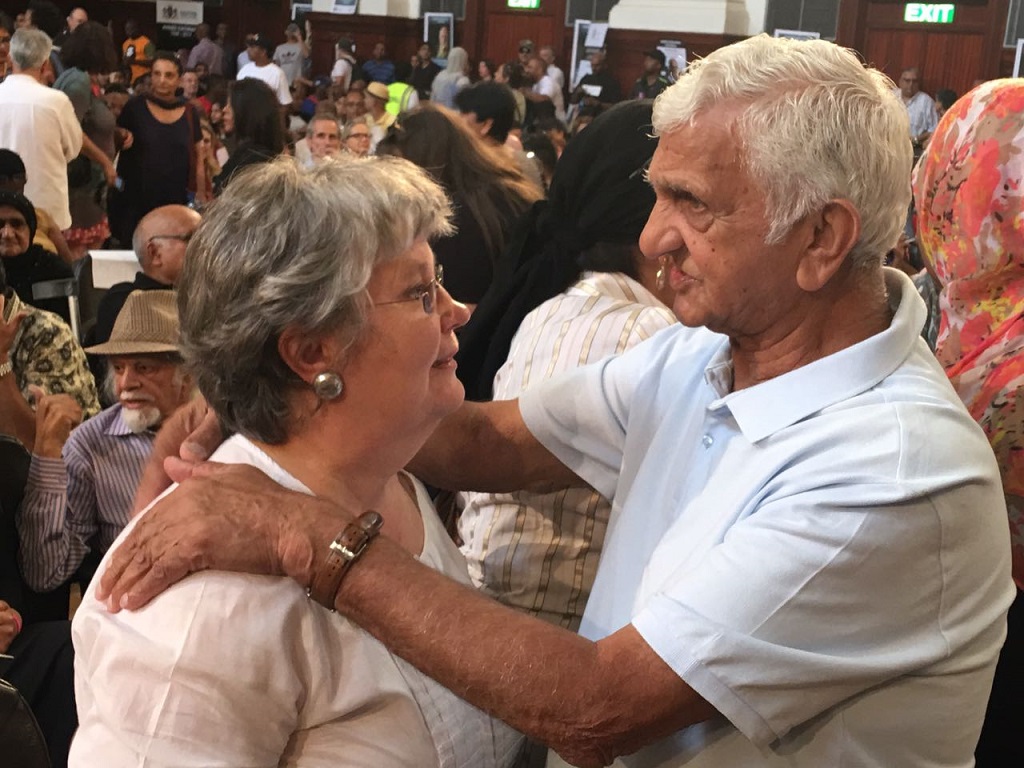 Barbara Hogan, the widow of Ahmed Kathrada, and Laloo Chiba, Kathrada's friend and fellow Robben Islander, greet one another at the memorial for Kathrada at the Johannesburg City Hall on 1 April 2017.

JOHANNESBURG – Gauteng premier David Makhura has conveyed sincere condolences to the family of struggle stalwart Laloo Chiba, who died on Friday at the age of 87.

“Chiba had a mild heart attack a few days ago and was hospitalised. He was discharged this week and passed away at his home in Lenasia,” Makhura said.

“We are saddened by the passing of the ANC veteran Isu Laloo Chiba. I visited him at his home on Wednesday after he discharged from hospital. His impact on our revolution was profound. His name is synonymous with discipline and leadership through the powerful force of example. He was a gracious, self-effacing, and compassionate comrade,” said Makhura.

“On behalf of Parliament, we offer our heartfelt condolences to Mr Chiba’s wife Luxmi, his daughters and grandchildren, and his comrades and friends,” they said in a statement on Saturday.

Chiba was elected as a Member of Parliament in South Africa’s first non-racial democratic election in 1994 and again in the 1999 election.

“This followed a life dedicated to the struggle against the apartheid government and for a non-racial, non-sexist, democratic South Africa, as envisaged in our Constitution.

"After retiring from parliament, Mr Chiba continued his lifelong dedication to entrenching the non-racial, non-sexist, democratic, and prosperous society for which he had fought.

"While the passing of this veteran of our struggle for democracy leaves a painful void, it must serve as a reminder to rededicate ourselves to the ideals for which they [struggle stalwarts] stood,” Mbete and Modise said.

In an obituary, the Ahmed Kathrada Foundation, of which Chiba was a board member, said Chiba was born on November 5, 1930 in Johannesburg. He attended the Bree Street Primary School and the Johannesburg Indian High School in Fordsburg. He married his wife Luxmi in India on May 5, 1952.

Our member and former Robben Island prisoner, Laloo Chiba (87), has passed away just a short while ago. Chiba had a mild heart attack a few days ago and was hospitalised. He was discharged this week and passed away at his home in Lenasia. LalooChiba pic.twitter.com/W2EwRRV4US

“In the early 1950s, he befriended young activists of the Transvaal Indian Youth Congress (TIYC) such as Ahmed ‘Kathy’ Kathrada, Bobby and Tommy Vassen, and Herbie Pillay, which awakened his early political consciousness. Kathrada’s arrest in 1956 together with 155 leaders of the congress movement on treason charges got Chiba thinking more seriously about his own political role.

“In the late 1950s he became politically active in the campaigns of the Transvaal Indian Congress (TIC) and the broader congress movement led by the African National Congress (ANC).

“The Sharpeville massacre, the banning of the ANC and the Pan Africanist Congress (PAC), and the declaration of a state of emergency by the racist National Party had a profound impact on his life. He joined the banned South African Communist Party (SACP) in 1960, being recruited to the party by the late ANC veteran Reggie Vandeyar,” the foundation said.

Chiba was a former Umkhonto we Sizwe platoon commander and was sentenced to 18 years imprisonment on Robben Island in the Little Rivonia Trial. He was jailed in B-Section, alongside Nelson Mandela, Walter Sisulu, Ahmed Kathrada and others. LalooChiba pic.twitter.com/r4LHrLc9q8

“Early in 1961, his SACP cell was changed into a sabotage unit under the leadership of Wolfie Kodesh. This unit was involved in the disruption of power supply and telecommunication networks in Johannesburg and surrounding areas. In the latter half of 1961, the SACP unit was instructed to disband and become part of the ANC’s armed wing Umkhonto we Sizwe (MK).”

He was arrested on July 6, 1964, taken to Langlaagte police station and detained in terms of the 90 days detention law. He was charged on several counts of sabotage together with four accused, namely Wilton Mkwayi, David Kitson, John Matthews, and Mac Maharaj, in what came to be known as the “Little Rivonia” Trial.

Chiba was sentenced to 18 years imprisonment on Robben Island Prison, which he served to the last day with leaders such as Nelson Mandela, Walter Sisulu, and Kathrada. In prison, he served on the communications committee in B-section set up by the high organ of the ANC to smuggle messages to the outside world and to the general section of political prisoners. He, together with Mac Maharaj, was responsible for the transcription and smuggling out of prison of Mandela’s autobiography Long Walk to Freedom.

After his release he soon became active in the revived Transvaal Indian Congress and the United Democratic Front. In 1983, he was elected as one of the vice presidents of the TIC. He was detained during the state of emergency in July 1985, returning from the funeral of Matthew Goniwe and others in the Eastern Cape. He was released from detention without trial on March 7, 1986 and shortly thereafter was instructed to go underground.

When the ANC was unbanned in February 1990, Chiba was appointed on to the Internal leadership committee of the ANC PWV region. In July 1990, he was elected as the ANC Lenasia branch chairperson, a position he held for four years.

After the democratic dispensation of 1994, he was elected as an ANC Member of Parliament from 1994 to 2004. In Parliament he served on the standing committee on public accounts, the portfolio committees on housing and correctional services, and the audit commission. He retired from official politics in 2004.

He was instrumental in establishing the Ahmed Kathrada Foundation in honour of his lifelong friend and political mentor. He served on the board of the foundation until his last days, visiting its office on a daily basis. On June 16, 2004 he was awarded the Order of Luthuli (Silver) by former president Thabo Mbeki, the foundation said.

Reunited once again with his best friend Uncle Kathy, we wish to convey our deepest condolences to the Chiba family on Cde Laloo&39;s passing.

Chiba’s funeral service will take place at 1pm at the Nirvana Secondary School Hall, 6 Willow Street, Extension 3, Lenasia on Saturday. The funeral will thereafter proceed to the Avalon cemetery crematorium. Former president Kgalema Motlanthe, also an Ahmed Kathrada  Foundation board member, will speak at the funeral.