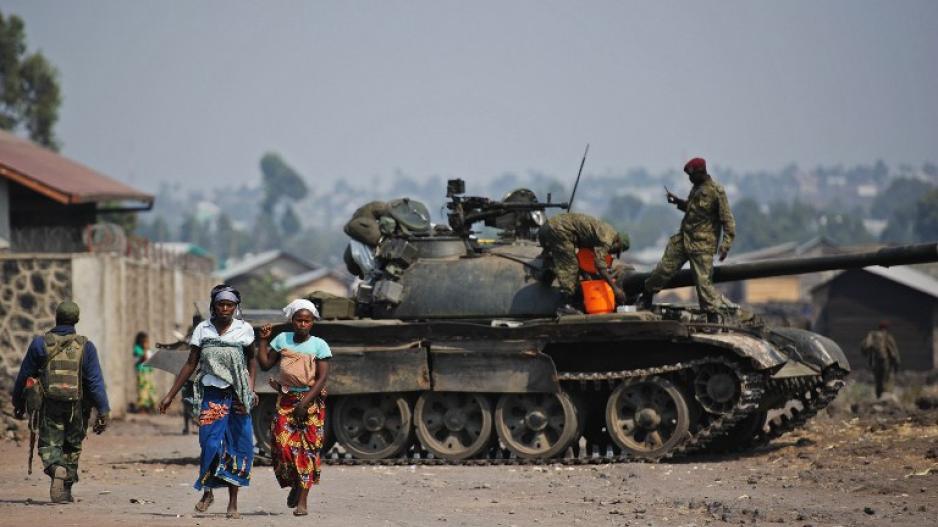 Two women walk past an army tank in Munigi, on the outskirts of Goma in the east of the Democratic Republic of the Congo on July 15.

Greeff made the comment following SANDF chief Lt-Gen Derrick Mgwebi’s press briefing where he said that the military awaits direction from the UN on whether to send the helicopters or not.

Greeff said the SANDF should cut through the red tape and make sure that South African troops in Goma are better equipped to deal with the ongoing fighting.

“There is a request from the UN to send at least two Rooivalk helicopters. Now it’s a bit worrisome that the UN would request these two helicopters and for Mgwebi to tell us today that the ball is in their (UN) hands, they need to sign some documents before we can give them these helicopters. If it’s important for the UN to have these helicopters, we must give them without any further delay,” said Greeff.

Greeff is also not impressed with the way the SANDF informed South Africans about its activities in Goma and the manner in which it gave an update on the three South African soldiers who were injured while fighting M23 rebels.

“I think the SANDF is struggling with their communication strategy. The SANDF needs to really re-plan the way they communicate with the public especially when they are going to get involved in these kinds of operations which require a more aggressive kind of employment of our forces as oppose to peacekeeping mode,” he said.

The current deployment will cost South Africa R403 million and the UN is compensating the local government for the expenses.

“The unfortunate part is that the expenses are currently being carried from the defence budget and the money that the UN is paying to the South African government does not go to the defence department, it goes to the national treasury. There is no guarantee that the defence budget will get back this money and that is a real problem,” said Greeff.

Watch National Secretary of the South African Defence Union Pikkie Greef discuss sniper tactics in the SANDF as well as the deployment of Rooivalk helicopters.