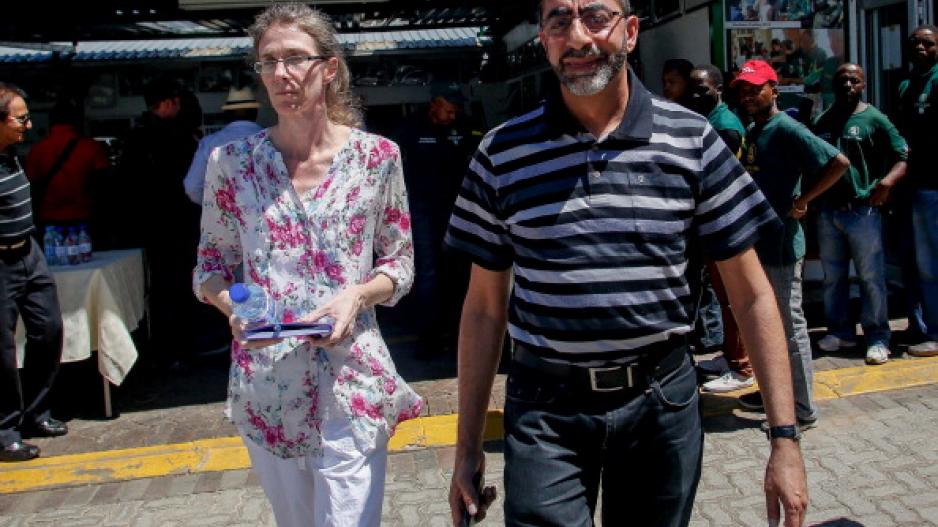 Yolande Korkie and Dr Imtiaz Sooliman ahead of a press conference on January 16, 2014, in Johannesburg, South Africa. Korkie and her husband, Pierre, were taken hostage by al-Qaeda in Yemen, in May 2013.

CAPE TOWN - A South African aid organisation said on Tuesday it was making headway in the long-running saga of two hostages, a South African and a Swedish national, who were captured by Al Qaeda in Mali in 2011.

The Gift of the Givers (GOTG) organisation has been working on the matter involving South African Stephen McGown and Swede Johan Gustafsson and on Tuesday, GOTG founder Imtiaz Sooliman said they were making headway in contacting the captors to communicate about the situation.

GOTG had earlier this year, “at the request of both families”, gotten involved in trying to contact the captors and in July, sent a Malian negotiator, Mohamed Yehia Dicko to Bamako, Mali, to see what contact could be made with the captors.

Sooliman said it was the “beginning of a lengthy and arduous process” in finding the captors, and four months later, some progress had been made.

He said: “Yehia’s journey took him to North Mali, to Gao, Kidal, to Niamey and Agadez in Niger, traveling thousands of kilometers by road to try and find a ‘connection’. Verbal contact was made with people in Burkina Faso and Mauritania, all in an attempt to find ‘someone’.”

According to a statement from GOTG, after Yehia had communicated with a number of different people, someone provided some advice and after on-and-off communication, sometimes with no communication for three weeks over an 11-week period, and being told that an answer would be given the following week, only for the answer to be indefinitely delayed.

Sooliman said it was “a test of patience for us and a time of great difficulty for both families who were clutching at anything in the hope that something positive happens”.

Breakthrough finally came on Friday, November 20, when GOTG received a one-minute call at 10am to say that they should await a further call with “good news”.

On Saturday, November 21, and Sunday November 22, they received a call about a video that would be delivered to them and news that both the captors (sic) were “healthy and in good condition.”

On Monday November 23, a call went through to the organisation to indicate that the video was ready for collection.

According to GOTG there was no mention of any demands and no details of what was on the video.

Sooliman said: “We are making arrangements to fetch the video and wait for instructions how and where to obtain it but we were told that we may have it by Friday, November 27. We asked isn’t it possible to get it tomorrow, November 25, and asked the person if anyone knew that November 25 is the fourth anniversary of the abduction. The person said he was not aware of that.”

He said the two families were “overjoyed” at the news that contact has been finally made with the captors after almost four years of no information.

Sooliman added: “Our analysis is the following: ‘someone’ agreed to take up our case, the captors have accepted Gift of the Givers as negotiators on behalf of both hostages, a special video has been prepared for us and they are ready for ‘dialogue’. We now need to get possession of the video and view the contents, then wait for ‘demands’ or instructions on the way forward or any other relevant messages.”

The families of the captured pair could not be reached for comment and the information supplied by the GOTG could not be independently verified by ANA.